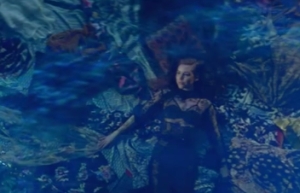 The New Peugeot 108 is packed with a raft of new technological features, including a reversing camera, a seven inch colour touch screen, keyless start, and a sliding cabrio roof. Using the existing TV advertisement - fronted by celebrated recording artist Lykke Li - WIREWAX enables users to click (or touch) on screen at designated points throughout the one minute trailer, to reveal a bespoke, popup animation illustrating the features in greater detail - allowing viewers to experience rich video-in-video content on new features, book a test drive and download informational brochures.

“Showcasing the New 108’s innovations in a fashion that would appeal to its younger, more tech savvy demographic quickly led us to the conclusion that an interactive film would offer just the right mix of message conveyance and fun,” commented Sebastian Underhill, Director of Content and Social Media at 33Seconds. “Having previously worked with WIREWAX on other successful projects, and based on Nucco Brain’s reputation, we were in no doubt as to their capabilities to deliver, and the final product speaks volumes to their creativity and professionalism.”

The trailer becomes part of the New Peugeot 108’s wider promotional mix - which includes TV, digital, paid social media, PR and ATL - launched in July this year. The supporting campaign - tagline entitled ‘this time it’s personal’ - is inspired by the hundreds of personalisation options available with the car and primarily targets a stylish, active, urban UK audience. A series of six second Vine videos led by creative social media influencers has also been created, using the campaign-wide hashtag #My108 to tie together the different creative interpretations of the car.

“The New 108 is as alive with innovation as it is a chic, modern driving experience,” commented Andy Goodall, Internet Manager at Peugeot UK. “We’ve gone out of our way to surprise drivers with our new compact by adding innovations over and above expectations, and the supporting trailer is perfectly in line with this mentality.”