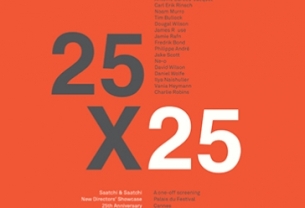 At Cannes Lions International Festival of Cre​ativity on Thursday 25 June, Saatchi & Saatchi will reveal a film created by 25 New Directors’ Showcase illuminati.  To celebrate 25 years of the NDS Saatchi & Saatchi invited 25 now distinguished directors to revisit their original film from the Showcase archive.  The unique 25-minute film - titled ‘25x25’ - will be premiered at the Palais des Festivals during a one-off screening sponsored by Corbis, a leading digital media company.

“25x25 is a celebration to thank the amazing directors who have made the NDS possible, and is testament to the enduring popularity of the Showcase,” says Pablo Del Campo, Worldwide Creative Director of Saatchi & Saatchi”.

Director Jake Scott commented:  "As accolades go, I think being selected for the New Directors’ Showcase was of the highest honour. When you’re just starting out and full of enthusiasm, but also self-doubt, an affirmation like this is fantastically energizing to your confidence! It’s inspiring to see the selections made each year and even a little intimidating!! I still think it’s one of the most interesting aspects of the festival."

Director Daniel Kleinman added: “I’m sure being selected for NDS early in my career brought me more attention than I might have had otherwise. I quite like attention, and welcomed the boost to my nascent stratospheric career. Thanks Saatchi & Saatchi.”