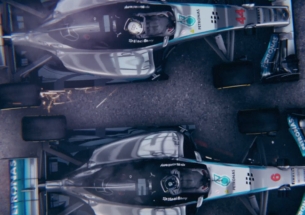 The Intro Partnership have collaborated with Gramercy Park Studios to create the high octane opening title sequence for the 2015 BBC Sport Formula 1 season.

Directed by Julian Gibbs, footage from the BBC’s rich F1 archive has been carefully put together to create a pulsating montage to kick off the new season, and Gramercy Park Studios were enlisted to provide sound design befitting of the legendary drivers and cars on display.

Aside from Fleetwood Mac’s ‘The Chain’, the visuals were supplied mute, so it was up to Gramercy Park Studio’s Toby Griffin to painstakingly build the soundbed from scratch.

Toby comments: “The new title sequence takes us on a trip through a dreamy blend of legends and classic cars. As the tension rises and we see drivers of different eras prepare for the start, a high octane audio backdrop builds to a crescendo as the lights go out. Once the action begins, we zoom in on classic F1 moments, with super slow motion shots enhanced by sound design for added impact. This is where I really get to have some fun.

“The music track - Fleetwood Mac’s 'The Chain', which was recorded in 1977 - is lacking in the bass department, so I boosted the low end frequencies for added impact. Then it's all about balancing the music and effects, the music has to lead the mix, but the effects need to cut through, to add to the drama.”

It’s a dream project for motor-racing fan Toby, who adds: “I've been working with the BBC Sport F1 team since they took over broadcasting the races in 2009, we have a great relationship which means I'm often given a brief over the phone and left to get on with it - a sound designers dream! They know I'm an avid fan and having worked on F1 for some time, I have accumulated a vast pool of F1 sounds spanning 40 years.

“The work always lends itself to some serious sound design, by nature of the visual content and the fact that the edit often arrives mute. The most challenging part of working on F1 promos is sourcing the correct engine noise and perspective for each shot. F1 engines have changed dramatically over the years and the sound they generate has altered dramatically too, the BBC get complaints if the engine note isn't right!”