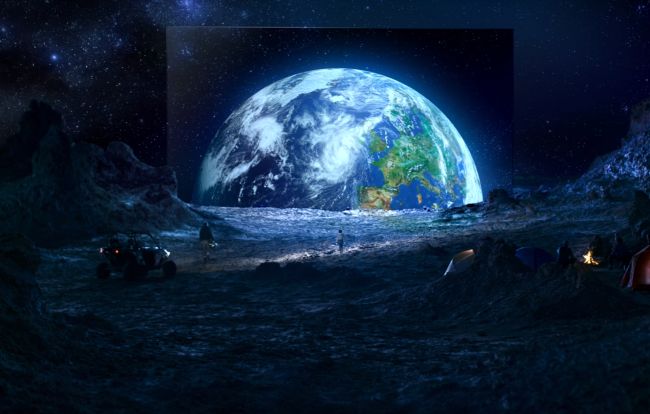 A new era of Sony TVs has just begun. To celebrate the launch of the groundbreaking Bravia OLED, Sony & DDB Berlin visited the alien landscape of the Atacama Desert in Chile to create their most dream-like campaign to date and invite consumers to ‘Experience a whole new world’.

The OLED technology in the new line of Bravias brings the viewing experience much closer to reality thanks to the purest blacks, most vibrant colours, and perfect contrasts.

But another remarkable quality comes from the TV’s design. The almost frameless screen creates a beautiful “horizon” effect, where image and colours go beyond the limits of the screen and spread onto the surface upon which it stands. And from this feature came the inspiration for the campaign.

The campaign film, directed by British filmmaker Ben Tricklebank, shows an enormous screen installation in the middle of the Atacama Desert that creates an impossible horizon: Earth rising on Earth.

Shot in 8K using a variety of cameras, including a Sony F65 and an Alpha 7 Mark II, the film displays the incredible image quality of the newest line of Bravia screens, capable of tricking the eye into believing it is watching something real. It also showcases the precise contrast that the TV is capable of displaying, between the absolute black of the night sky and the rich colours of the rising planet.

“The commercial pays tribute to Sony Bravia’s tradition of producing visually stunning films, but also opens up a new direction in the brand’s advertising world, with a welcome dose of storytelling. This year’s work is unlike any that has been seen before in Bravia’s many years of making commercials and I believe that ‘Earth Rising’ is one of the most beautiful and technically difficult scenes yet. Additionally, with the launch of OLED we want to convey the message that this is ‘the dawn of a new era for TV’. So in that sense, the creative perfectly aligns with what we want to say," said Shuhei Sugihara, Sony.

“Sony aimed for the stars when creating the first Bravia OLED. So in our third international Bravia campaign with Sony, it felt like a natural step to aim for the stars as well," Gabriel Mattar, DDB.

In true Sony tradition, music was an important consideration. Given the mysterious, otherworldly nature of the film and the impactful reveal of Earth rising on Earth, a previously unreleased track called “Heart as a River” from artist Robot Koch was identified as the ideal soundtrack for the film.

The campaign also encompasses cinema, digital, social media, out of home and point of sale and will launch globally from June 2017.