Expats in the ‘Dam: W+K Amsterdam Old-timers & Newbies on Dutch Culture and an International Spirit 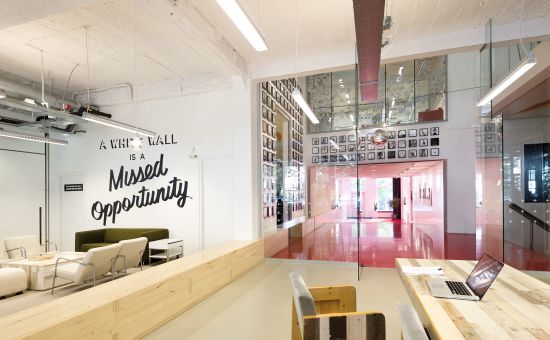 A Spaniard, Kiwi and Russian walk into an ad agency’s canteen, the first pulls out a broodje-kaas, the second devours a kroket and the third… well, he left again ‘cause he forgot to lock his bike.

If this sounds a bit odd to you then you’re clearly not working at a creative agency in Amsterdam such as Wieden+Kennedy, which opened its canal-side office way back in 1992. That’s 23 years of getting used to Dutch food, the color orange, riding your bike everywhere, being asked for directions to the Red Light District by a stoned tourist on your lunch run and feeling slapped in the face by Dutch directness. We asked some W+K Amsterdam old-timers and newbies about what its like to be an expat in the city and how the agency adopts Dutch culture while retaining its international spirit.

In the last two decades W+K Amsterdam has seen a lot of growth and a lot of people come and go, but the culture of the agency remains rooted in the international spirit of the city. “Creatives get mentally constipated if they’re not filling their brains with different thinking,” mentions newcomer Jake Barnes, a Kiwi-copywriter. “Amsterdam being home to more nationalities and traditions than the United Nations makes it a breeding ground for creativity.” In-house recruiter Sophie Worth, who has been in the city for over 20 years, agrees, “In a few years we grew from 20 people to over a hundred, but the spirit always stays the same. We hire like-minded people from all over the world, throw them all together and friendships form quickly as everyone speaks (lovely accented) English. This creates a ‘gezellig’* campus-like atmosphere.”

The inherent international spirit of the city and agency not only inspires people, but also impacts the work. “Because we’re such an international agency people come from all over so there’s always new and fresh perspectives,” says Judd Caraway, one of the founders of the agency’s creative incubator program - The Kennedys. “When this many people come together with so many different types of backgrounds it makes for a unique recipe. It's interesting. It creates one-of-a-kind insights and point of views for our creative work,” adds Group Account Director of four and half years, Kirk Johnsen.

In addition to working with over 20 different nationalities in a single agency, expats are also quickly acquainted with the straightforwardness and direct nature of the Dutch – something the culture is renowned for. “I really appreciate the forwardness of the culture,” says Kacey Kelley, a Business Affairs manager who came to W+K from San Francisco five months ago. “Everything is upfront - what you see is what you get, which certainly helps when you’re doing business.”

In addition to the huge community of expats, the city of Amsterdam is it’s own source of inspiration. While the visually stunning architecture, canals and biking culture are certainly part of this, it’s the city’s vibe, liberal culture and a ‘feeling of freeness’ that seem to most strike a cord. Creative Director Alvaro Sotomayor, who has been with the agency for 20 years, describes Amsterdam as a “Neutral space for thought and opportunity, which gives you the space and the distance to think about problems without having to deal with nationalistic or local issues or anything but the task at hand.”

Amsterdam’s easygoing and free nature can’t help but rub off on the city’s businesses, and W+K is no exception. “There aren’t many places where you can graffiti the walls, the awards decorate the toilet, you can throw bananas across the canal from your desk and where the agency bar has a tap that takes your picture every time you order a ‘biertje*’,” says Kirk Johnsen.

Is there a downside to Amsterdam? “A lot of people complain about Dutch food, though I love bitterballen and if you go to the right places the food is actually quite amazing,” says Senior Account Manager Amber Martin, who joined nine months ago from Singapore. The weather is also a contentious point, but the city’s biking culture clearly makes up for this. Jeff Lam, Art Director and a recent recruit from San Francisco, says “It’s really nice to be able to hop on a bike and be anywhere in like 10-15 minutes, which is a huge change in terms of lifestyle. In San Fran people bike, but it’s not the same. Here it’s relaxing - when you get to work you feel refreshed and even if you had a really long or crap day when you bike home it winds you down. That’s a huge plus of living here.”  Kacey Kelley adds, “It’s kind of an equalizer. No fancy cars with a driver for some, everyone just hops on their bike to go to a meeting together.’

What else do you need to stay afloat in Amsterdam? “A boat,” says Alvaro Sotomayor. “Every time we win a pitch I say – let’s buy an agency boat! There is no better way to celebrate and enjoy Amsterdam than on a boat. And this summer it is finally happening.”

Kelsie Van Deman, Head of Interactive Production who has been with the agency for nearly six months, says “What’s special is how weird everyone is. Everyone is really passionate about what they do, but everyone is also a little bit quirky and different. Everyone says it’s kind of like a pirate ship and I think that’s a very accurate description of W+K Amsterdam as it’s not like any agency I’ve ever been at.”

So if you spot a motley crew of expats and Dutchies roaming the canals this summer it might just well be the W+K Pirates trying out their new ship.