The app essentially transports the dancers into your living room 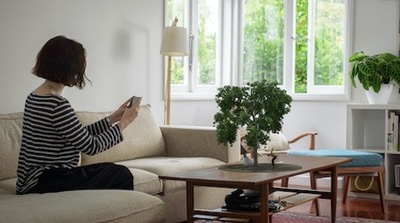 At the end of last year, Exit Films and Blockhead VFX were looking for an opportunity to show off some of the advancements that had been made in AR what it can do for brands.

When Exit director and innovation lead, Adam Gunser, watched a performance by the New Zealand Dance Company, an idea formed. AR could help the NZ Dance Company to expand its audience, he reasoned accurately, by introducing new, and in particular younger, people to dance and help to promote its dance education programme, which runs classes throughout New Zealand.

Says Gunser: "It was a chance to make dance cool for a different audience than its traditional followers."

It was also an opportunity for Gunser and Exit to collaborate with Blockhead and show the technology available for clients to use.

Says Declan Cahill, executive producer at Exit: "It's a perfect fit for us. Innovation and technology is something we're really attracted to. We're enjoying working on the boundaries of technology."

The NZ Dance Company also saw the potential in Gunser's idea. And so Exit and Blockhead's AR experience, Orpheus, came into being. It allows its audience to walk around the scene as the dancers perform in their living room. Or watch them from every angle, including above, as the dancers perform on a table. The technology essentially transports the performers into your living room. The audience can zoom in and zoom out, control the scale of the performance, or even learn the choreography and perform with the dancers.

Says Gunser: "There were advantages to highlight and challenges to conquer, but streamlining the production process and creating a manageable pipeline will hopefully help demystify the AR process for clients moving forward."

Says Stefan Coory, creative director, Blockhead: "The first step was to do a motion capture, to make the experience true to the choreography and recreate the nuances in each dancer's way of moving. We also had to make the characters in the app representative of the actual dancers, not just cartoony characters. So each character was modelled and textured, even down to their tattoos. Then came the dress. We needed to make the dress move as a real dress would, bringing real life to the experience."

The shoot involved 36 cameras, which filmed the dancers from every angle, and body mapping suits to ensure that every detail in every movement was accurately reproduced. For Blockhead, the project was an exciting opportunity to explore new platforms and their potential, both creatively and for creating a buzz around an event or brand.

Says Gunser: "Blockhead's abilities at managing difficult technology and tricky storytelling were amazing. The traditional filmmaking elements they added - modelling, animation and AR/VR development show why they were so well positioned to partner with us on this kind of work."

In fact, the only unconquerable challenge turned out to be the technical limitations of phones. The quality of the work that Gunser, Exit and Blockhead achieved is higher than phones can accurately reproduce unless they are Apple 6S or later. The app has only been developed for Apple IOS devices so far.

Gunser is no stranger to integrated campaigns. His success in creating Orpheus follows his success in directing Pedigree's Child Replacement Programme for Colenso BBDO. That campaign has just become New Zealand's #1 most effective and the world's #3 most effective campaign in the 2018 WARC 100 as well as winning a host of creative awards at all of the major award shows, including Cannes Lions.

Says Cahill: "In a way Adam's work on Child Replacement was a precursor to Orpheus. One of the reasons we took it on was because it was a fully integrated campaign, with different digital elements that elevate it from being just traditional film work - something really special."

Says Simon Vicars, who was executive creative director of Colenso BBDO at the time: "We knew we had something good, but Adam really made it great. Playing it as straight and as Hallmark as possible was something we all talked about early in the process, and Adam totally nailed it. His attention to the craft - camera moves, art dept, voice talent - made the comedic misdirection so good. You cross your fingers that you find the right partner on projects like this, and we definitely did when Adam and Declan came on board."

Says Ahmad Salim, group business director at Colenso BBDO: "The team on CRP was amazing and every part of the campaign was crafted with love because everyone loved the insight and believed in the cause. As a result, it's been one of the world's most successful campaigns making number 3 on the 2017 Gunn Report, winning gold at Cannes and Grand Prix at other shows, as well as winning a number of Effies. More importantly, it engaged the people of NZ so much that dog adoption enquiries went up by over 800%, saving the lives of hundreds of dogs and filling the void for loads of empty nesters. A welcome side effect was Pedigree NZ's biggest sales spike in almost a decade finally seeing them take the number one spot from its competitor."