It was Quinn's ability to create believable stories that resonate with people, though, which cemented his new relationship with Exit 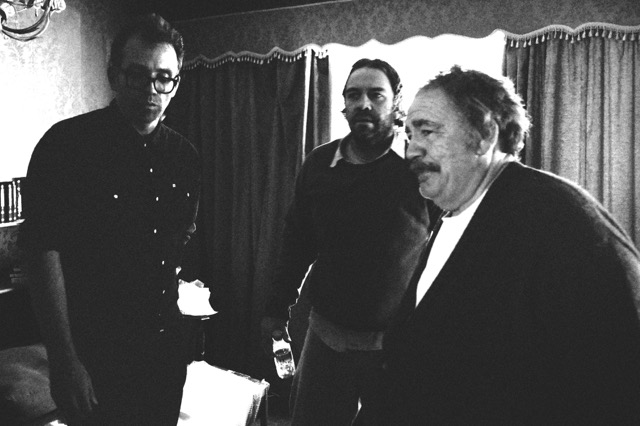 Exit Films has signed Ben Quinn (far left) for representation in Australasia, during a trip home for Quinn.

Says Leah Churchill-Brown, executive producer, Exit: "Ben's work resonated with Exit because it is primarily about performance, and people captured with a distinctive visual eye. This is a vernacular that is in our DNA."

Says Quinn: "They always make such beautiful films. Their pedigree is awesome. It churns our talent. The list of directors and DPs who once DA-ed or cleaned the loos there is remarkable."

He is now on his way to shoot commercial for Deutsch N.Y. in Barcelona. When that finishes, he begins casting for a feature film.  At the core of both these projects, and all of Quinn's award-winning work are natural, believable performances. Performances that invite viewers to connect with what they are watching. It's no surprise then, that Quinn began learning his craft in the documentary department at the BBC.
Says Quinn: "I come from docos. I saw things beautiful things happening in front of me, untouched by the director's hand. I loved being able to bottle that unfettered reality.  They taught me to see the beauty in the everyday."

Further on, Quinn's mentor and now co-filmmaker, Walter Campbell, taught him, "Cut the Bullshit. Don't even do it if people won't believe it".

Quinn adds: "This dedication to performance and doing what I have to do to make a film feel authentic has never let me down."

Quinn left Australia in 1996 to live and work in the UK. He founded his directing career there. As his finesse grew, that career flourished. In 2008, he created a spot for humanitarian project, The Elders. On first screening, that film drew a standing ovation from the room that included Nelson Mandela, Desmond Tutu and Jimmy Carter.

A year later, Quinn worked with Nicholas Hoult, Michelle Ryan, Emilia Fox, Joanna Page and Goldie on Samantha Morton's, "Help Give Them a Voice" campaign for the COI, a campaign to recruit more than 5,000 social workers for vulnerable children, adults and families. In 2010 and 2011, Quinn worked with Ralph Fiennes on Fiennes' adaptation of Coriolanus, assisting Fiennes in his development and realisation of the film. He went on to direct the second unit in Serbia. Quinn's 2017 film, I Missed my Mother's Funeral, starring Ben Cox and shot by Barry Ackroyd, was selected to screen in festival throughout the world and was shortlisted for a BAFTA.

Throughout all of this, Quinn was also gaining a reputation as the director able to turn simple stories into memorable advertisements, directing campaigns for Nike, Fosters, Reebok, Mazda, Coke, Chevrolet, Subaru, Panera and Samsung, with agencies such as Anomaly, Deutsch, CHE Proximity, R/GA and Leo Burnett.

In 2017, Quinn's film for Dicks Sporting Goods made with Anomaly about the Fifth Ward Saints, a youth football team in Houston Texas, won many awards, including and AICP and a Clio.

Quinn's ability to make stories that feel real and capture at an emotional level will be apparent in his new work for Deutsch and PNC Bank.

The individuality that Quinn injects into his film, he attributes to Walter Campbell, ranked by D&AD as one of the world's most awarded creatives ever, along with Sir John Hegarty, Bob Isherwood, David Abbott and Neil Godfrey.

Quinn continues: "If I ever had a problem with a script or just couldn't crack it, I'd ask Walter and he'd send me some vague reference or obscure photo - that was absolutely perfect. We're still like that. We speak most days, even though we now live in opposite countries."

Campbell wrote Under The Skin with Jonathan Glazer in which Scarlett Johansson starred, and has also penned the film on which they are working together, from a story that Quinn and Campbell heard six years ago.

Says Quinn: "It's a beautiful but brutal story about a marriage breakdown, the story of a Belfast woman in the '60s who is forced to give up her child. And like everything Walt writes, there are images in there that you couldn't even imagine."