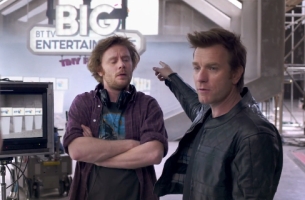 Over the coming months the new campaign will feature a variety of famous actors, celebrities and leading sports personalities who will appear in amusing situations that poke fun at the world of advertising. The famous faces will star alongside a series of regular characters, including the “BT Clients”, “The Director” and “The Ad Agency Creative”, and will provide the voice of reason in comparison to the bizarre and entertaining vision of the some of the characters.

Ewan McGregor, actor, said: “I’m thrilled to be starring in this new campaign for BT. I hope the viewing public enjoy the action, alongside the laughs."

David James, BT Consumer Marketing Director, says: “BT is very excited to be launching its new marketing campaign. It follows our previous hugely popular campaigns, including Adam and Jane’s love story as well as the flatmates. The public got to know these characters and took them into their hearts. We are confident that they will do the same with our new host of intriguing characters.”

“BT has an extremely attractive TV and Broadband offer for consumers and we wanted to introduce these to the public, in an entertaining and unique way. After all, it is not often that you see Ewan McGregor hanging out with footballers Robin Van Persie and Alex Oxlade-Chamberlain, along with a group of zombies and Vikings. We have stuck with the humorous nature of our previous marketing campaigns which have proved so popular.”

The new television campaign will be supported by a national outdoor advertising campaign that will run across the UK during the month of April. The campaign will also have a strong focus on digital and social media with activity across Facebook, Twitter and YouTube introducing viewers to the new characters.