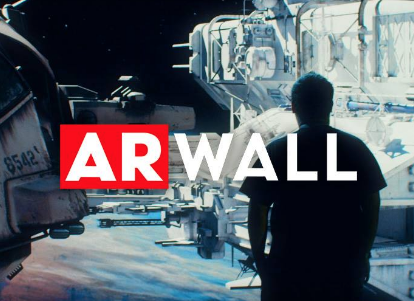 This fascinating showcase of their technology, now available by appointment, extends until January 31st, 2018.

The ARwall imaging technology on display renders in less than one frame of delay at 24 frames per second, making the system the first AR film tool suitable for final production shots, rather than pre-visualization.The platform functions perfectly with no goggles, no headsets and no wearables that would interfere with the flow of filmmaking, offering true immersion. The ARwall platform is demonstrated for showcase visitors against a massive LED wall of 20 x 12 feet to showcase its mobile, headset-less capabilities.

Notes Eric Navarrette, ARwall CMO, “ARwall’s spatial imaging technology is currently four times faster than equivalent technology on the market. Less than one frame of delay means we are a viable film tool for TV and movies. More than one frame of delay is too noticeable for DPs and VFX supervisors, hence why no one has attempted an AR solution like this before--no one thought it was possible.”

In addition to displaying its rapid, in-demand technology from Phase 2, ARwall has been selected as a featured technology partner for Slamdance, running concurrently with the Sundance Film Festival in Park City, UT, during the opening weekend from January 19 - 21, 2018. ARwall will showcase the imaging technology from Treasure Mountain Inn, Park City, UT.

Beyond Slamdance, ARwall is slated to present at the SXSW Accelerator Pitch Event in March as one of five startups in the Augmented & Virtual Reality Technologies Category, and will be providing services to major studios for film, TV, and OTT content, as well as live activations for brands and events.

ARWall Showcase demonstrations are available by appointment. Email Eric Navarrette at eric@arwall.co, to schedule your viewing.