We Are Social create Twitter campaign featuring the #AmazingBabyRescueMe hashtag 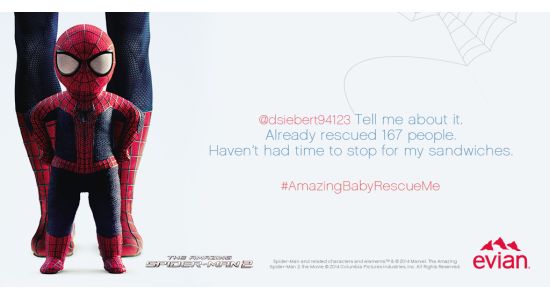 Evian will harness the power of superheroes to help people solve their problems on Twitter in the second stage of its global Amazing Baby & Me 2 campaign.

In the first stage of the campaign Spider-man meets his own inner-child, the Amazing Baby. Building on the idea that there’s a super-baby within everyone, evian will encourage their community to take a fresh look at everyday problems through this twitter activation. They'll provide fun solutions that encourage their followers to let their inner super-babies out to play.

Followers of evian’s @evianwater Twitter account will be invited to share their dilemmas using the hashtag #AmazingBabyRescueMe, and evian® will respond with creative and funny solutions to these problems. These personalised solutions will come in the form of humorous tweets, Vines and illustrations from evian’s newly created Amazing Baby character, via the global evian Twitter account.

evian® will also undertake social listening in order to surprise social media users who are having a bad day with a personalised response from its Amazing Baby. Throughout the campaign, content will be curated on an Amazing Baby Pinterest board.

Along side this global activation, evian UK will be using its Facebook page to launch a competition, asking fans on Facebook how they would make the most of having a secret spidey sense. Each day, the four best answers will be selected and winners rewarded with a limited edition Amazing Baby water bottle and cinema tickets to see The Amazing Spiderman 2.

Laurence Foucher at evian, said: “To build on the success of The Amazing Baby and Me 2, we wanted to encourage people to engage with, rather than just watch, the film. Using social media platforms, we’re able to bring The Amazing Baby & Me 2 to life and leverage fans’ excitement in the weeks following the premiere of The Amazing Spider-Man 2 film release.”

Deola Laniyan, senior account director at evian’s social media agency We Are Social, said: “People will often use Facebook and Twitter to discuss new film releases, and this campaign will tap into this by allowing people to engage with Spiderman concept, reinforcing evian’s association with the film.”

The Amazing Baby and Me 2