Ever Wonder Where the Unicorns Went? BETC Paris & CANAL+ Have the Answer

Editors' Choice: New commercial sees a portion of Noah's ark that was left out of the bible 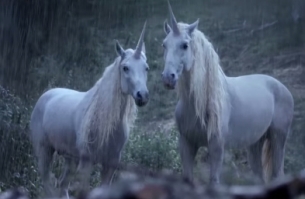 The film celebrates the broadcaster’s talented screenwriters and showcase of original programming consisting of series, documentaries and fictions, created by and for CANAL+.

With the tagline 'We love making up stories' we’re taken on an adventure with Noah and his ark where we see a side of the unicorn that we don’t usually associate with the mythic creatures.

Once again, BETC Paris turned to director Matthijs Van Heijningen, who also was behind The Closet and The Bear. The film was produced through Parisian production house Soixante Quinze.

"The most complicated part of making the film was the kind of epic discussions we had about what a pair of Unicorn b***s actually look like, because obviously no one has ever seen them. We thought of putting stars there, or little furry things. We ended up opting for a bit of sobriety. Well, a sort of sobriety at least…” said Stéphane Xiberras, CCO and President, BETC Paris.