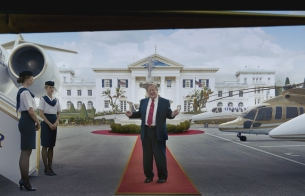 Eurojackpot cuts straight to the chase in a new campaign that tells viewers to “Win an obscene amount more than you'll ever need”.

Veikkaus, the Finnish lottery operator, shuns cliches of superyachts, desert islands and jewels in favour of an unashamed simple truth.

Created by hasan & partners Helsinki a series of TVCs feature a fictional loud-mouthed American billionaire, Orson Lockwood III, who lambasts the “teeny weeny” €10 to €90 million euro weekly jackpot whilst he indulges in a number of luxury pastimes.

Eccentric Orson warns potential players of the “insignificant” prize as he relaxes in the hot-tub of his private jet, shoots a rifle in the grounds of his grand estate, and sits for a portrait in his palatial stately home.

The three executions end with the blunt message: “Every Friday win €10 to €90 million euros. An obscene amount more than you’ll ever need”. The integrated campaign also includes outdoor and online banners, along with a website that features Orson laughing at the size of the jackpot.

The campaign draws attention to Eurojackpot’s prize pot, which is the largest of all the region’s competitors. Although Veikkaus has the monopoly in Finland it competes with several different lottery games and many online gaming brands.

Saila Kuutti, marketing manager at Veikkaus, comments: “The world of Eurojackpot is rich and exaggerated. It’s fun, humorous and doesn’t take itself seriously. Right from the start we knew we wanted to be different and hasan & partners has helped us turn this into a reality.”

hasan & partners creative director, Mikael Nemeschansky, adds: “We’ve turned the stereotypical lottery ad on its head to communicate the message of a huge jackpot through the eyes of somebody who doesn’t think it’s significant at all. The strapline is deliberately, bold, upfront and in your face - just like Orson Lockwood III.”