Shifts to content creation with move to Greenwich Village, NYC 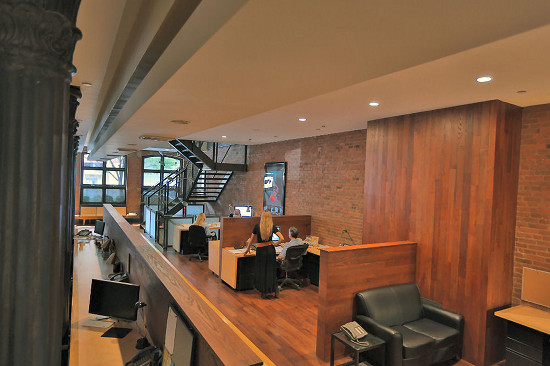 Production company EUE/Screen Gems has taken the wraps off a major transformation of its business in New York City.

The company has relocated from its longtime home on the East Side of Manhattan, where it produced countless traditional broadcast TV commercials and launched the careers of many top directors.  It’s new home – in a suite of light, airy and stylish offices on Greenwich Street in the West Village – is designed to highlight the company’s new focus on creating and producing content for ad agencies, brands and media companies, as well as on its extensive projects in the television programming and entertainment space.

EUE/Screen Gems continues to operate its major shooting stage complexes in the south.  Based in Wilmington, North Carolina and Atlanta, Georgia, its’ studios have been home to numerous feature film, television and advertising projects. But with the move to Greenwich Street, EUE/Screen Gems has changed its business model in New York to one that no longer requires that it operate and maintain large shooting stages in the city.

“It’s really been a reflection of the way our company and our work here has evolved,” explains Doug Wedeck, EUE/Screen Gems Executive Vice President and E.P., about the move downtown.  “This is a great space, one that’s very conducive to the kind of creative work we’re doing now.”

“It was great to have the stages,” adds Executive Producer John Posimato.  “We built some great relationships there and produced some really memorable work. But this is the right move for EUE/Screen Gems in New York today and going forward.”

The move only affects the New York footprint of the company, Wedeck notes.  EUE/Screen Gems now includes divisions focusing on advertising content creation and production – both in digital media and more traditional channels – and an entertainment division headquartered in L.A. that is represented by Creative Artists Agency.

The company continues to shoot commercials for major global brands and agencies around the world, Posimato points out, tapping a wide range of directorial talent.  “Our size and scope have allowed us to develop lots of far-reaching relationships, both with clients and with directors,” he says.  EUE/Screen Gems currently works closely with a number of advertisers for which it has preferred vendor status, and collaborates closely on production jobs with agencies, independent production consultants, client procurement departments and other stakeholders.

As for the capabilities available in the company’s new Greenwich Street home, Wedeck observes that, aside from the presence of the big shooting stages, nothing has changed except the address, the decor and the vibe. “We still handle everything here from production through post, and that’s particularly important when dealing with longer format web projects,” he says.

Working out of three floors of a classic brick building in the heart of a bustling creative hub of ad agencies, production companies and tech firms, the space is a far cry from the former home of “Guiding Light,” the venerable CBS daytime drama that was produced on EUE/Screen Gems’ midtown stage for years.

“Everyone loves working down here,” Wedeck says of the new headquarters. “It’s just a really great environment, and it reflects how we’ve adapted to the changing demands of our industry.”