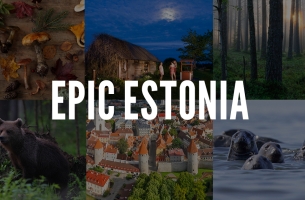 Ninety-seven Swedish people are to be offered once-in-a-lifetime experiences that will turn them into ambassadors for Estonia as part of a campaign designed to celebrate the wide variety of activities that the country has to offer.

The ‘Epic Estonia’ campaign is based around the insight that people increasingly book their holidays based on what other people say about their own experiences.

The campaign has been developed by hasan & partners Stockholm for Visit Estonia and the Tallink cruise company and asks potential ‘Epic Estonia Ambassadors’ to apply to take part in an Estonian experience from the selection of 97 published on a new website EpicEstonia.com, which has been produced by Perfect Fools Stockholm.

Options for epic Estonian experiences include a day with an Olympic champion and night sailing off the Estonian coast.

The Ambassadors will start their journey with a VIP Tallink cruise experience across the Baltic. From here they will embark on their Epic Estonia adventure with a brief to share their experiences via their own social platforms. Each experience will also be documented and posted on EpicEstonia.com to create a montage of epic experiences that shine a light on the myriad things you can do in Estonia.

The campaign uses the 97 motif in recognition of the number of years since Estonia first declared independence in 1918.

Janis Pavuls, marketing director at Tallink Silja AB, commented: "We invite Swedes to become Estonia’s digital ambassadors. When a friend experiences something epic we are more inclined to listen and be inspired, because we trust them more than the traditional messaging. The heart of this campaign is to turn ordinary people into tourist ambassadors via their social media."

Katrina Sokk, campaign manager at Visit Estonia, commented: “Forget what you’ve heard about Estonia, this campaign enables would-be visitors see it, nearly touch it and almost experience everything that Estonia has to offer from an ordinary travellers’ perspective.”

Sophia Wrangel, account director at hasan & partners Stockholm, said: “It’s a simple truth that ’people trust other people’. It would have been too obvious to shoot a host of models enjoying Estonian nightlife, but that’s not what resonates with our audience, personal opinions do.”

The campaign is supported by online advertising, outdoor, and social media activity.