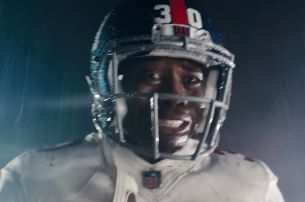 Droga5 is the creative agency, and led the concept, creative development and direction for the multiplatform campaign.

“Whether it’s a memorable play or an infamous fumble, making it to highlight status on SportsCenter is a badge of honor,” said Wanda Young, SVP of Marketing and Consumer Engagement, ESPN. “That’s Gonna be on SportsCenter is an aspirational phrase uttered by athletes and fans alike, and we’re shining a light on its significance with this campaign.”

Added Norby Williamson, EVP and Executive Editor, Studio Production, “Fans have a personal connection with SportsCenter, regardless of where they engage with the show. The context and personality we provide around a highlight is a key differentiator, and this campaign illustrates the fact that it’s not truly a highlight unless it has made it on SportsCenter.”

That's Gonna Be on SportsCenter is a multi-dimensional campaign that will come to life and engage fans across the ESPN platform. In the initial television spot, “Reflection,” a football player lamenting a botched play is visited by an other-worldly Kenny Mayne, who lets him know that the moment is definitely going to be on SportsCenter. Unfortunately for the player, it will be a part of the Not Top 10 segment, where highlights are celebrated for their infamy, rather than achievement.

Coming this Fall, ESPN's game producers will begin flagging SportsCenter-worthy moments in real time. During live game action, That's Gonna Be on SportsCenter graphics will appear when Top 10 or Not Top 10 moments occur, serving as a natural extension of the campaign.

Fans will have an opportunity to get in on the action as well with themed GIFs with the campaign expression, which will be loaded into the GIPHY library. From there, fans can identify their own SportsCenter highlights and share them across social media.

"We wanted to reaffirm why SportsCenter is the go-to destination for all the highlights, lowlights, and everything in between that exists in the world of the SportsCenter audience. At the end -- and beginning -- of the day, SportsCenter serves as the ultimate curator that sees and breaks down everything that unfolds in sports, and those highlights are paramount to that experience," said Brandon Pierce, Group Creative Director, Droga5.

SportsCenter has been ESPN’s signature news and information brand since the launch of the network, inventing the genre and setting the standard for serving sports fans. SportsCenter has evolved into a multiplatform presence and millions of fans connect with SportsCenter on a daily basis via television, the ESPN App and on social media platforms including Twitter, Instagram, Facebook, Snapchat and more.

That’s Gonna be on SportsCenter will complement the existing This is SportsCenter campaign, which launched in 1995 and includes a library of more than 400 spots.