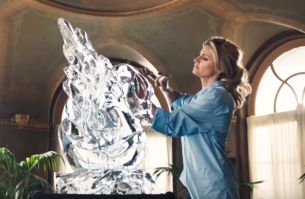 This summer, as anticipation builds towards the announcement of Dos Equis’ next “Most Interesting Man in the World,” the iconic beer brand teams up with esteemed host Erin Andrews and legendary actor Luis Guzmán to encourage fans to 'Stay Thirsty' in two digital spots. As these videos showcase their ranks among The Most Interesting People in the World, Dos Equis is also providing fans the opportunity to prove how interesting they are through the “Dos Equis Interesting Index,” a proprietary algorithm built for the Facebook platform.

The Dos Equis Interesting Index algorithm scrubs through users’ specific Facebook data to determine a “score” in four different categories: originality, thirst for knowledge, worldliness and sense of adventure, which then produces an overall worldwide ranking. To prove how interesting you are, fans can go to DosEquis.com/InterestingIndex to discover their ranking, peruse exciting summer hacks and enter sweepstakes to win prizes including festival tickets and backyard grilling accessories. Fans can improve their status throughout the summer by participating in interesting activities, visiting local Dos Equis bars and restaurants, and entering the sweepstakes.

“Dos Equis was born interesting in 1897 when it was first brewed by a German brewmaster in Mexico,” said Andre Woldt, Brand Manager of Marketing for Dos Equis. “With the conclusion of the first chapter of The Most Interesting Man in the World campaign, this is a most interesting time as we continue to evolve the brand. We’re working with Erin and Luis, who both live interesting lives, to inspire consumers to prove they’re interesting and see where they rank in the world amongst their friends.”

In preparation of the brand’s 120th anniversary, Dos Equis is also refreshing the brand’s logo and packaging. The new visual identity nods to the brand’s Mexican heritage and further highlights the taste profile of a crisp, refreshing, beer with a well-balanced finish. Dos Equis will launch TV commercials to support the new visual identity on June 13, and primary and secondary packaging will begin to rollout across the country in mid-July, for both bottles and cans.