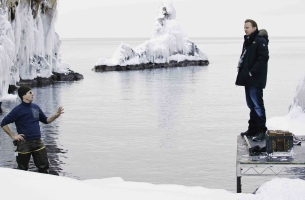 Starring James Denton and Marta Milans, “Strangers” is a novella film of intrigue about two broken characters who awkwardly meet at a crossroad where they touch on the possibility of love. The story plays as a symphonic poem around two reticent people in an expansive and isolated setting. As both find their way through a dark period in life, their uncomfortable interaction pushes them toward a desperate resolution.

“Strangers” is a follow-up film from the team behind the internationally, award-winning short “Ana’s Playground.” Writer/Director Eric D. Howell and his team received top honors at 20+ festivals around the world. “Ana’s Playground” won four Academy Qualifying festivals and went on to be short-listed for an Academy Award. “Ana’s Playground” continues to be screened around the world by a variety of organizations and educational institutions including Right to Play, The Search for Common Ground, and the United Nations Security Council. The film is scheduled to be screened preceeding a panel discussion on "The Impact of Armed Conflict on Girls," taking place in Berlin later this month during a conference hosted by the German Institute for International & Security Affairs.

The SMFF received just under 2000 films this year for submission at the 2015 festival. Approximately 1500 of those were shorts. According to Festival Director David Katz, 24 films were selected, including two features including one feature documentary. 22 shorts were selected for this year’s festival, including two short docs, three international films, and one animated film.

Additionally, Director Eric D. Howell and Editor Clayton Condit are in the midst of wrapping production in Italy on Howell’s first feature film “Voice From the Stone.” Produced by Dean Zanuck, SPLICE is completing editorial on the film and all post-production. “Voice From the Stone” is scheduled for a theatrical release later this year.