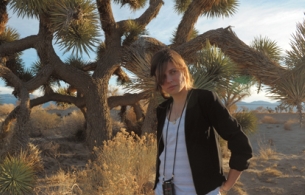 Epoch Films is excited to announce the addition of flourishing New York-based director Emily Kai Bock to its celebrated roster. Under the leadership of Founder Mindy Goldberg and Executive Producers Melissa Culligan and Youree Henley, Bock brings her cinematic vision to a company with a 25-year history of building the careers of successful filmmakers and seamlessly transitioning the brightest talents to the commercial arena. In keeping with the Epoch tradition, Emily Kai Bock is poised to take her fresh and visionary body of work to new heights.

Emily Kai Bock has been capturing the attention of audiences ever since her clip for Grimes’ “Oblivion” became a viral and critical sensation, leading to it being hand-selected to screen at World Short Film Festival, TIFF, and LA Film Fest. Bock's fine arts background heavily influences her unique documentary and portrait-like style.  At the 2014 New York Film Festival, Paul Thomas Anderson screened “Oblivion” during his master-class on filmmaking, citing it as an influence on his film, Inherent Vice.

Bock’s most recent musical collaboration with pop savant Lorde, for her track “Yellow Flicker Beat” off of The Hunger Games: Mockingjay soundtrack, saw a striking study in film noir, depicting Lorde in a series of differently lit vignettes, varying from the soft light of a neon sign to the dark drama of the Jazz Age.

In The Arcade Fire’s “Afterlife,” Bock helmed an exquisitely enigmatic narrative where dreams and memories converge between three characters, centering on a father and two sons grappling with the death of their wife and mother. The video won the Prism Prize for Best Canadian Music Video and the 2014 UKMVA for Best Alternative Video. Bock has also created visuals for the likes of Grizzly Bear, Haerts, Sebastien Schuller, Kool Music 5, and Majical Cloudz.

Bock’s documentary short about the underground New York rap scene, Spit Gold Under An Empire, was commissioned by Nokia in partnership with Sundance TV and debuted at the 2013 Festival. A rhythmic tapestry with an ingenious blend of music video, documentary and film, Bock composes an unflinching portrait of the city’s vibrant new wave of hip hop.

An established force in the music video and documentary scenes, Emily Kai Bock is positioned to stun the commercial world with her intimate and arresting artistic vision by joining the ranks at Epoch Films. “Epoch is known for their commitment to their directors, building a career with their best interests at heart, being selective with commercial projects, and offering surrounding support for personal creative work,” Bock remarks. “They have fostered some really inspiring careers in a short period of time and I’m thrilled to become a part of that history.”