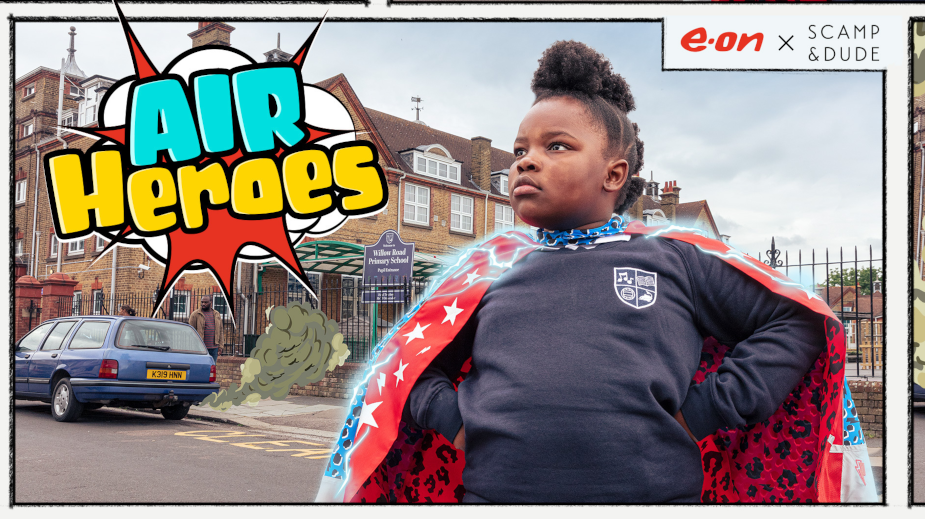 E.ON, one of the UK’s largest electricity suppliers, has teamed up with fashion brand Scamp & Dude to create an innovative cape for children that helps to destroy air pollution. This superpowered cape, and the supporting ‘Air Heroes’ campaign, encourages parents to ditch the car and walk to school instead. It has been devised and created by Engine Creative.

E.ON is committed to leading the energy transition, moving from fossil fuels to renewable electricity and low-carbon energy solutions, moving us closer to a carbon neutral future and cleaner air for everyone in the UK. It is on a mission to help clear the air across the UK.

To help combat the growing issue of pollution around schools, the E.ON x Scamp & Dude Air Heroes capes enable children (and their parents) to take action. The capes empower the children and give them the ability to become Air Heroes who can help fight pollution simply by wearing one of these capes on their walk to school. Each cape contains an innovative, patented fabric created by theBreath which absorbs and disintegrates air pollution, helping to clean the air.

The launch of the capes is supported by the ‘Air Heroes’ film, which shows a young girl who is suddenly faced with a menacing pollution monster on her way to school. But, as she is wearing her Air Heroes cape, she is fully prepared and swiftly and fearlessly defeats her nemesis. The voiceover lets viewers know that by walking to school in one of these superpowered capes, they can help fight car pollution thanks to the special fabric which “breaks down pollution particles, letting you become an Air Hero”.

The girl and her cape will go on to fight pollution in further social and digital executions, while supporting activity is planned with podcasters and influencers. The campaign promotes a competition where parents can win capes for their child’s entire class, which they can enter on our competition page.

E.ON has also teamed up with the Cartoon Network and Boomerang to create a series of idents and a special collaboration with Teen Titans Go! In addition, the brand has worked with Learn by Design to deliver a lesson to primary school-aged children that helps educate them all about air pollution.

The ‘Air Heroes’ campaign was devised by Engine Creative, which was also behind E.ON’s 2019 multi-award-winning air quality initiative featuring a giant pair of lungs which monitored the air pollution in London. The idea for ‘Air Heroes’ is to go beyond education and actually help to reduce air pollution, especially around schools where idling cars on the school run exacerbate the problem. 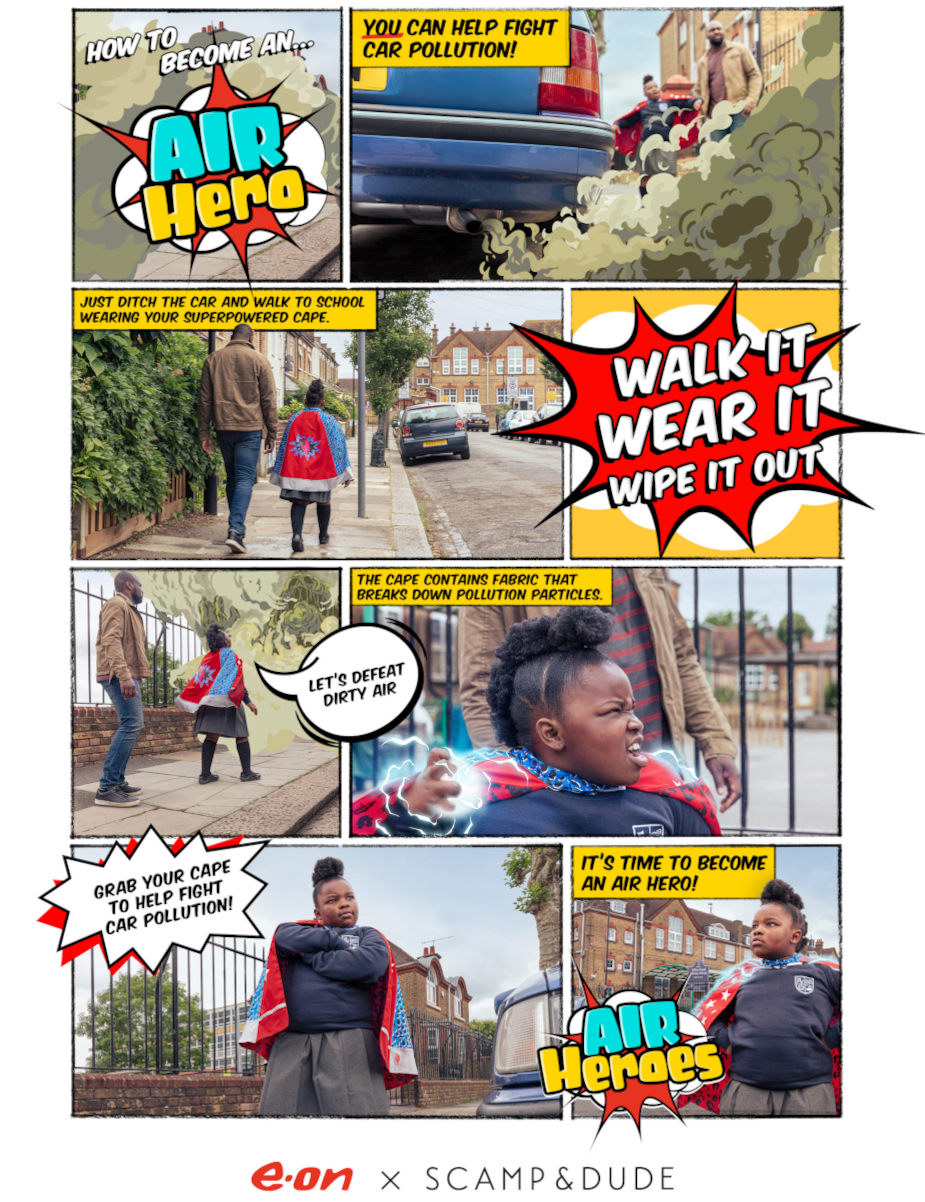 Scamp & Dude creates clothes which empower children and is a brand with sustainability at its core, which made it perfect for E.ON to collaborate with. Each individual cape contains enough of theBreath fabric to break down the amount of air pollution produced by four petrol cars over the course of a year.

Scott Somerville, head of brand and Marketing at E.ON said: “Pollution and air quality affects us all on a daily basis and we know from our research that it’s something parents and children are actively worrying about, especially around schools. So we wanted to create a campaign that would raise the awareness of air pollution in a fun and engaging way and inspire parents and children to think about the small steps they can take on a daily basis to help clean the air in our communities. We’re delighted to have teamed up with fashion brand Scamp & Dude to create the Air Heroes capes and we hope together we can empower children and parents to become Air Heroes and make a difference. It’s all part of our wider commitment to driving the energy transition, giving us all a cleaner and greener future.”

Ross Newton, creative director at Engine Creative said: “Even though it’s virtually invisible, we wanted to show kids that car pollution is out there and it’s an enemy that needs to be destroyed. We also wanted to convince them that they can take action themselves and be as powerful as the superheroes they admire in comics and films. By following that superhero visual style, we knew we would instantly engage them, and then it was simply a case of explaining how they can fight pollution and create cleaner and safer air for everyone”.

Jo Tutchener-Sharp, founder of Scamp & Dude, said: “At Scamp & Dude, our mission is to fill people with superpowers. With many children worrying about air pollution, it seemed like a perfect fit to create an exclusive design that would not only look great, but help to make a genuine difference. The E.ON x Scamp & Dude Air Heroes capes bring together our signature print with a magic ingredient – the technical fabric – to supercharge children across the nation.”

The campaign breaks on 6th September and runs for two months across the UK.