ENVY's Sound Department Looks Back at a Successful 2015 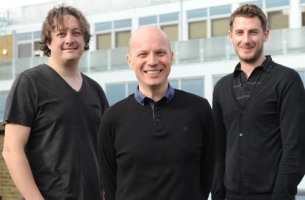 Since its official launch in March, ENVY’s dedicated advertising division has exploded into life. Alongside the company’s broadcast offering, the specialist short-form arm has laid the finishing touches to a number of high-profile, award-winning and incredibly diverse projects - all to great success.
A key component of the company’s short-form offering is its award-winning sound department. In the last year alone, the sound design team has picked up prizes at the D&ADs, British Arrows Craft Awards and BAFTAs, whilst a trio of jobs – including the highly decorated Oral B ‘Merry Beeping Christmas’, Channel 4’s ‘Crabbie's Grand National’ and The Times’ ‘Unquiet Series’ – made the cut in the APA 50.
From commercials, TV and music promos to channel branding, digital content and on-air sponsorships, the team has demonstrated a diverse skillset that’s able to adapt to any brief. Projects such as December’s BBC Music Awards, in which ENVY created the VTs and sound for the live event, demonstrate an innate understanding of both broadcast and short form post-production.
Long-standing partnerships have helped the department flourish and ENVY Advertising frequently team up with long-time collaborators 4Creative to create bold and daring campaigns, including a recent project to promote Channel 4’s coverage of the Rio 2016 Paralympic Games. Senior sound designer Rich Martin worked alongside director Alex Boutell to create a soundscape for a tongue-in-cheek spot which highlights C4’s commitment to changing the public perception of disability.
The two companies also collaborated on a recent dark, brooding promo to welcome legendary jockey AP McCoy to Channel 4’s horse-racing coverage. Sound designer Dave Williams worked closely with director Rob Blishen, manipulating a Johnny Cash track to cover introspective, celebratory and full on violent themes befitting of one the sport’s greatest icons.
“I love the brutal soundscape that Dave created and his attention to detail,” says Blishen. “Never has one man listened to so many bone breaking sounds in search of audio perfection. As usual, ENVY added so much to the project – they cherish a job right up until the second it leaves the building!”
Overseeing the department’s continued success is a trio of highly experienced, talented and decorated individuals; Ian ‘Arge’ Hargest, Rich Martin and Dave Williams.
With over 20 years of experience in London’s commercials industry, Arge has worked at a number of agencies and production companies, including a decade at Saatchi & Saatchi working on campaigns for British Airways, Carlsberg, Lloyds, Sony and Toyota, and brings big budget quality and creativity to any project he works on.
Having picked up countless awards, including D&AD, Music and Sound, British Arrows and Creative Circle metal, Arge says: “It’s my role to make clients fall in love again with a film which they’ve watched a thousand times already! I’m incredibly lucky to be able to work on a variety of short form projects with a group of talented, nice people and I thrive on my work surpassing the expectations of our clients.”
Working alongside Arge is another Senior Sound Designer in Rich Martin. With 21 years of experience, two Music and Sound Awards, numerous Promax Awards and a D&AD Black Pencil to his name, Rich is one of the industry’s top class sound designers. Along with Arge and Dave, Rich is a founding member and investor of ENVY, commenting: “It was the opportunity to create something from scratch, in what was at the time a pretty stagnant industry, that excited me most,” he says, “It’s so important for sound to be at the heart of an idea, whether it’s commercials, branding, digital content or on-air promotions.”
Rich developed his well-honed armoury of skills at Silk Sound and Blue before joining ENVY, and his love of sound extends well beyond office hours. Rich is the founder of SeeksMusic -an internet radio station made up of a host creative colleagues and friends, including Arge, which broadcasts an eclectic array of shows with an emphasis on new music.
Completing the trio is Sound Designer and Dubbing Mixer Dave Williams. Working across commercials, trailers, TV promos, channel branding and on-air sponsorship projects, Dave works tirelessly for clients and has proven to be an ideal fit for ENVY. He comments: “ENVY is a great environment for sound design and the facilities enable us all to execute flawless work. I’m fortunate enough to have worked on a host of big name projects, such as the AP McCoy spot for C4, but some of my proudest work stems from the smaller audio jobs.”
Supporting the senior members of the sound design team is a youthful underbelly of creative talent. ENVY has developed a well-earned reputation for nurturing young talent thanks to its academy. The brainchild of Natascha Cadle, ENVY’s Co-Founder and Facility Director, the academy is a way for the company to bring in young, raw and partly schooled talent and provide them with professional, industry training. It’s proved a success as over half of the company’s creative staff has come through the ENVY academy.
One member of the sound design team that ENVY has high hopes for is Sound Assistant Marcin Pawlik. Abby Orchard, Head of Production, explains: “We’re proud to nurture young talent and we’re excited about Marcin’s potential. He’s been carrying out client sessions and they’re loving him which is brilliant. He’s only been with us for around four months but we’re hoping that he grows into an integral member of the sound design team!”
With the short-form team set to move into a dedicated new facility in 2016, the future looks bright for ENVY Advertising. Cadle comments: “Not only has it been a great year for the sound design team but the entire advertising arm. Since we officially launched ENVY Advertising in March we have grown tremendously. We have our first VR project under our belt, we’ve continued to work with some fantastic clients – and we can’t wait for what 2016 has in store!”
view more - Company Profiles