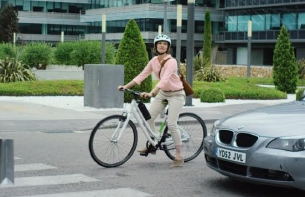 The minute-long film, directed by Guy Soulsby, showcases the powerful new bike that, with its pedal assist, helps boost the speed of cyclists.

Post work was completed at ENVY by Nick Armstrong (Offline), Jason Farrow (Flame) and Matt Lawrence (2D Design). Explaining the edit, Nick Amstrong comments: "The edit of the EBike film was about striking a balance between the slow and palatial footage with the pace of the kinetic energy of the bike in motion; it had to feel both elegant and energetic."

Guy Soulsby adds: "Working with ENVY is always a pleasure, it's a very welcoming place and as the turn around on this job was quick all departments involved needed to be on the same page and clear about the approach. Nick Armstrong worked a great edit, a lovely mix of perfectly timed cuts that created the final fluid pace and feel to the advert, Matt Lawrence's 2D graphics enhanced and conveyed the bike's story in a delicate manner, and finally Jason Farrow in Flame packaged the spot with some seamless clean-up."

The Gtech eBike rides like a normal bike but, as soon as you pedal, you’ll feel the difference as a powerful lithium-ion battery and motor give you a boost whenever you need it. Making hills feel flatter, riders will be able to explore further and arrive fresher with the electric bike.