ENVY Ensures Nothing Can Drag Down 1D's Latest Space-bound Promo 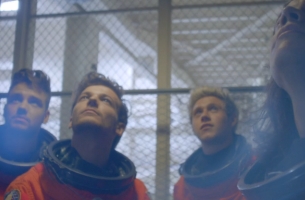 ENVY Advertising’s latest partnership with Fulwell73 sees One Direction performing their latest single ‘Drag Me Down’ at NASA in Houston.

Directed by Ben and Gabe Turner, with Director of Photography Charlie Wuppermann, Envy Advertising worked on the grading and VFX elements to ensure the highest production values for the promo.

“The emphasis of the grade was to keep the appearance as natural as possible, to really enhance its cinematic style,” comments ENVY Advertising colourist, Vicki Matich. “This involved pulling back some of the over-saturated colours during the performance and contrasting the training scenes with a much cooler look.   As ever, there was a lot of balancing between shots, getting skin tones and brightness just right. It was a blast to grade, the final product looks like a mini film!”

ENVY Advertising has a long-standing relationship with Fulwell73 having worked together on previous One Direction promos including ‘You and I’, ‘Story of My Life’, ‘Night Changes’, as well as their latest fragrance commercial, ‘Between Us.’

The ‘Drag Me Down’ music video will be launched from Friday 21st August via One Direction’s website and international TV.