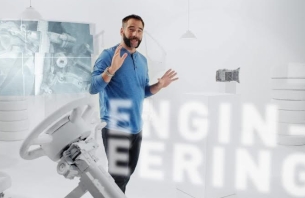 ENVY Advertising has recently finished work on a series vignettes for the Discovery Network, which promote Casio’s sponsorship of motoring on Discovery Channel and Quest.

The six-part series of minute-long films feature racing enthusiast Jimmy de Ville, as he talks about his extreme engineering adventures and explains how to manage motoring problems under time pressure.

The concept of the project, conceived by Director Marcus Jones, was to use 3D models, text, diagrams and screens to illustrate the stories told by de Ville from his studio-based environment.

Pete Burch, Post-Producer at ENVY Advertising, explains: “All post elements were created and animated in After Effects by Designer Mathieu Dellabe, with grading, extra-elements and final compositing being completed in Flame by our Senior VFX Artist, Dean Wyles.”

Discovery has teamed up with Casio Edifice to bring viewers the best of their motoring season, which includes restoring rusting relics on Fast N’ Loud and treasure hunting classic cars on Wheeler Dealers.