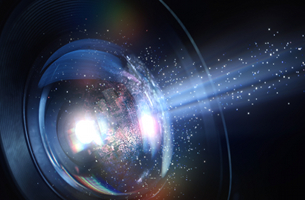 Sky Creative and ENVY Advertising have teamed up to create a series of spectacular idents as Sky Movies is replaced by the new look Sky Cinema.
To coincide with the launch, Sky Creative has collaborated with ENVY Advertising and The Mill to put together the set of exciting new idents. Opening on a film projector, the idents take the viewer on an emotional journey by exploring the projector’s particles, ultimately revealing Sky Cinema’s new branding.
ENVY sound designer Arge was tasked with creating bespoke sounds for the rebrand. The sound design heightens the excitement of the journey, whilst creating a personality for each particle across distinctly different scenes, each of which represents a unique emotion associated with the Sky Cinema viewing experience.
Arge comments: “Starting with the sound motif of the projector, the journey takes us closer to the lens to change our perspective on the sound. As we hear the particles forming, layers of traditional projector effects morph into more detailed bespoke sounds – you can hear mechanical lights flicker, bulbs crackle, rain sticks and reverse glass effects. We used as many glass, silverware, dust, dirt and rubble noises as we could find, not to mention fireworks!”
The sounds were then run through multiple Doppler effects, re-pitched, time stretched and run through further filters, before Arge added the magic touch; multiple tempo noise gates that give the particles a ‘flutter’ effect.
Arge explains: "I wanted it to feel like the particles had their own distinct personality within the sounds and, at points, even go as far as to give them their own voices, so I jumped into the voice booth and, much to the entertainment of the Sky Creative team, made the noise of particles enjoying themselves with my own voice. When I explained that this is how Ben Burtt does the voice of R2D2 they were convinced I was a little less mad than they first thought."
Arge concludes: "It’s been great project with a fantastic team. The guys at Sky Creative are a dream to work with, as is the talented Dave Connolly, whose orchestra in Prague provided the score, and the guys at The Mill who worked with the visuals."
view more - Creative