Team up with Fulwell73 to create this year's epic film 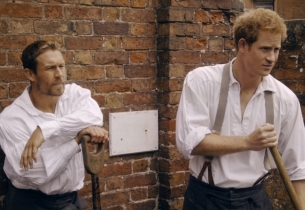 Prince Harry joins a raft of rugby legends as ENVY Advertising and Fulwell73 kick off the 2015 Rugby World Cup with the launch of the epic opening ceremony film.

Devised by Kim Gavin, Director of the 2012 Olympics closing ceremony, the film is centred on Webb Ellis’ creation of the sport in 1823. It aired for the first time on ITV on Friday, as well as on Twickenham’s big screens ahead of England’s opening match against Fiji.

Using a combination of Flame and Nuke, ENVY Advertising rotoscoped footage of international rugby legends from epic matches and meticulously composited them back into newly shot footage of famous landmarks for each hosting city.

The film reaches its conclusion with a ball being propelled into the stratosphere and, at Twickenham on the opening night, a ball fell from the sky to create a live action finale.

The stratosphere rugby ball sequence was created entirely in CG by ENVY Advertising, using a combination of Maya, Nuke, After Effects and Photoshop.

ENVY Advertising Flame Artist, Eileen Chan, comments: “Once we had selected the legends player footage, we supervised a week’s shooting of live action background plates.  We composited the players onto the plates tracking them into position by eye and adding a ghostly effect to highlight their status as legends of old.”

ENVY Advertising Sound Designer, Arge comments: “An epic soundscape was required to match the cinematic scale of the pictures. Right from the opening rousing speech, to the action on the Rugby pitch, through the archive and into the finale, it was important that the sound design added a whole extra layer of excitement and emotion to the journey. Building with the scale from the start, the sound needed to provide extra drama and suspense whilst at the same time complementing Grammy award winning Steve Sidwell's stunning music score.”

ENVY Advertising Producer, James Trimming comments: “Beginning with the fateful moment of Webb Ellis picking up the ball at Rugby School in 1823, through to the complexity of the legends montage and ending with the beautiful CG stratosphere sequence, it’s been a joy to collaborate with Fulwell73 on this compelling film. Matching the live action camera moves on location with the archive footage had to be perfect in order for the legends to bed into each scene.”