Entertainment or Empathy - What do People Really Want From VR?

The Influencers 521 Add to collection 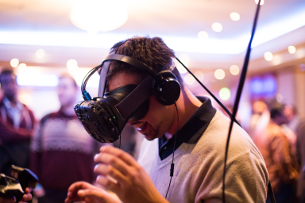 Now the major players in the industry have brought out their headsets, we’ve never had such a widely-available opportunity to explore the possibilities of Virtual Reality technology. However, despite the myriad of content options out there, some reports have already stated that current users are more interested in enjoying the familiar than exploring the unknown, with many using HMDs to watch 2D films.

China’s low-cost headsets, designed to enhance the viewing of 2D film and TV, has been cited as a forerunner to this consumer interest, and the “cinematic mode” of Sony’s PSVR headset is being prominently mentioned in their advertising.

Figuring out what people want in regards to VR content is crucial if the industry is doing to succeed.  So what do people really want from Virtual Reality?

Virtual Reality is a medium which arguably has no fixed purpose; it’s designed to give its users complete interactivity and “total immersion” in a digital scenario, but beyond that, applications are completely open to interpretation. The only limit is your imagination. The entertainment industry has been quick to embrace some elements of Virtual Reality; the first of six IMAX VR hubs are opening in the UK, while Qantas airlines trialled VR inflight entertainment as far back as January 2015.

Earlier this year, a developer at HTC was quoted as saying “the hardware is ready, but the software just needs to catch up”, but this isn’t entirely true; the software possibilities of VR are endless, and REWIND has made every use of them, from contributing to Björk’s Somerset House exhibition to providing a panoramic view of the Strictly dancefloor. Admittedly though, Virtual Reality devices currently lack “that killer app,” the one which will do for VR what Pokemon Go did for Augmented Reality.

The scope of Virtual Reality content is as wide as it could be, with new entertainment applications being devised on an almost daily basis. However, with over 200,000 developers signed up to design games for Oculus Rift alone, gaming is likely to be the first VR art form that truly comes into its own. And we’re already seeing signs of this with Resident Evil VII - since the recent release of the game, it’s been found that 10% of players are using a PSVR headset to experience the game - that amounts to 81,000 people!

VR, empathy and beyond

Whilst the gaming industry is an obvious candidate for adopting Virtual Reality technology, could VR find its most lucrative niche in more practical uses? Reports and opinion pieces seem to come in on a daily basis around how VR will revolutionise business meetings, help cure stage fright, and assist cutting edge medical research for both physical and mental health concerns, amongst countless other functions.

These new frontiers of Virtual Reality are arguably just as newsworthy as entertainment-focused ones, if not more so. Beyond its recreational uses, Virtual Reality has been described as “the ultimate empathy machine”—hence how it has already been embraced by journalists from the New York Times to the Guardian to put viewers into war-torn Syria and solitary confinement, amongst others things. The latter publication singled out the medium’s ability to provide “embodiment and perspective” when telling stories.

However, some have also noted the issues around journalistic ethics and integrity VR reportage may lead to. The New York Times’ award-winning film The Displaced, for example, has been criticised for requesting multiple takes of its “stars”, and the use of selective editing, further blurring the line between accurate journalism and filmmaking.

A code of ethics for Virtual Reality journalism does not yet exist, and the Associated Press is working towards “democratising” VR as a medium for telling news stories. Until that point occurs though, much like with Virtual Reality gaming and filmmaking, the playing field is wide open.

MCV found that in 2016, the HTC Vive sold 420,000 units, the Oculus Rift 250,000 units, and the PSVR 915,000 units. However, Samsung’s Gear VR outstripped them all, selling a whopping 4.51 MILLION units - that’s more than all the others combined! These predictions are incredibly encouraging and show that there’s plenty of room for VR for entertainment, empathy and much, much more.

Sol Rogers is Founder and CEO of REWIND