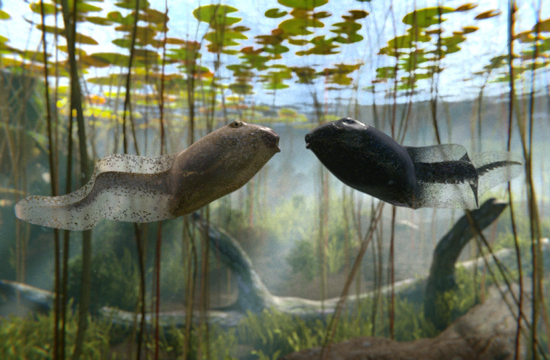 Freeview, the UK’s biggest TV provider, today reveals a new advertising campaign that highlights the great, free entertainment Freeview offers.  Based on the proposition: ‘Entertainment. It’s even better when it’s free’, the creative equates the wonder of an underwater world seen through the eyes of a young boy, with Freeview’s content.

The new 60 second advert – which will air during Saturday’s X Factor on 5th October, stars two CGI tadpoles and their respective clans from different sides of the pond.  After meeting for the first time and falling for each other, the two ‘clouds’ of tadpoles perform a synchronised dancing extravaganza set to The Kinks You Really Got Me. During the end sequence, the viewer discovers the performance has been watched by a young lad who appears totally in awe of what he’s just seen, proving that entertainment is even better when it’s free.

The campaign builds on the value message, which has run through all of Freeview’s recent communications, and evolves the now iconic Freeview balloons, which have become synonymous with the range of quality channels and programmes available on the platform and that Freeview provides 95 per cent of the nation’s most-watched programmes.

Guy North, Marketing Communications Director at Freeview, said: “With this campaign we want people to engage with the brand, by showing just how amazing entertainment that is free can be. We hope this will make them think again about Freeview and realise that far from being second best, being free can mean something is even better.”

Alongside TV advertising, the Freeview website will host a dedicated ‘Pondview’ hub providing a playful environment for users to interact with the campaign and will include the backstory of how the two leading tadpoles met in ‘Pond Side Story’. www.freeview.co.uk/

Pondview  launches on 4th October.   The new creative will be used through the line via PR, social media and a regional roadshow tour in the Autumn.