England Set to 'Face A Nation' at The Ashes 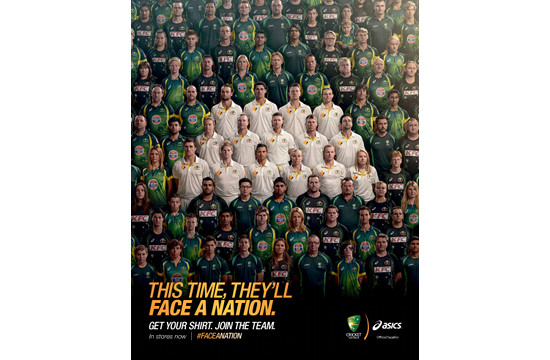 With the Ashes starting yesterday in Brisbane M&C Saatchi Sport & Entertainment has launched a campaign for client ASICS, the official apparel partner of Cricket Australia titled ‘Face A Nation’.

Face A Nation is a multi-channeled campaign launching the new range of replica ASICS playing shirts and will live across television, print, out of home, POS, at match and digital for the duration of the hotly anticipated series between Australia and the old enemy England.

“Our cricket team holds a sacred role in Australian sports and this campaign is about showing we’re together as a nation heading into this massive summer of cricket against our rivals,” said Sam Chew – Senior Marketing Manager, ASICS.

“The response from Australian fans wanting to be involved was immense; it’s actually precisely where the inspiration for this idea came from. Our backs might be against the wall this series, but we love our sport and Australians are passionate about their cricket team.”

M&C Saatchi Sport & Entertainment. Managing Director Jamie Gilbert-Smith said:
“The summer period is especially competitive for cricket sponsors. To cut through we identified a simple message to champion for the season – stand together and we’ll be strong. The shirt is a rallying point for fans to show their defiance of the English as well as your passion for the Australian side.”

Face The Nation campaign will commence with the airing of the TVC during the First Test of the Ashes Series between Australia and England today.