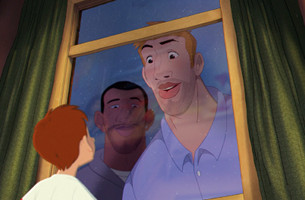 England rugby partner O2 has today unveiled its first ever animated campaign, which sees the England Rugby Team turned in to giants through the power of support.

Created by VCCP London ahead of the biggest tournament in English Rugby history, the animation marks the latest stage of O2’s Wear the Rose campaign which is calling on the nation to get behind England Rugby. Directed by award-winning Blinkink director, illustrator and animator Elliot Dear, the film follows the England Rugby team as the entire nation Wears the Rose, turning the players into formidable, yet friendly, giants who are ready to take on the world.

With a myriad of twists and turns, the film shows England Captain Chris Robshaw, Mike Brown and Courtney Lawes moving from bewilderment as they grow size in their everyday lives, to realisation that the power of support can make them giants – giants who have the determination, passion and pride in representing their nation and being a formidable force on an international stage.

Over twelve months in the making, and featuring over 6,500 hand-drawn and hand-coloured character frames and 74 hand-painted backgrounds, the 2D animation was created by 30 animators - headed up by world renowned lead animator Dominic Carola - who worked 18,420 hours in total to create the 2 minute call to action for English pride and support.

Nina Bibby, Marketing and Consumer Director at O2 said: “Our film shows that whoever and wherever you are, the power of support can make a huge difference. We want to inspire the nation to help make the England Rugby team feel like giants and what better way to do that than through an emotive and patriotic animation that can appeal to everyone, from children to parents and grandparents.  So whether you are watching at home, in a pub or in a stadium, we’re calling on everyone to Wear the Rose and get behind the team. Tweet your messages of support using #WearTheRose.”

The animated film will first air at 8am on 9th September exclusively on O2’s YouTube channels via a ‘flock to unlock’ Twitter campaign. It will then debut during the first episode of Gogglebox on Friday 11th Sep, introduced by Caroline Aherne (the Gogglebox narrator). At the same time the animation will be shown as a roadblock across other digital TV channels including BT Sport, Gold, Dave, All4, Film4, More4 and E4. Over the weekend the two minute film will also be shown across all cinemas in England.

The creative will feature across online, out-of-home and print advertising up and down the country. This includes all major print titles and premium spots such as Waterloo Motion, Ocean’s full motion Grid screens and a unique Oxford Circus underground tunnel wrap. As part of a TV first the creative will appear as an exclusive advert on the bus shelter in Coronation Street for six weeks. O2 store fronts across England will also be transformed as rugby fever takes over the nation.

For those who want to emulate their heroes and see what they too can look like animated, O2 has also made an Avatar Creator where the public can play with face shape, hair styles and even the size of their nose and eyes to create an England Rugby-inspired avatar to use across their social media channels as the ultimate symbol of support for the England team.

O2’s Wear the Rose campaign calls on the country to make the team feel like giants through the power of support. Other activities across the summer have so far included the O2 Touch Tour which travelled the country throughout June and July, the launch of a 50,000 Official England shirt giveaway through Priority last month and the recent rebranding of all O2 stores to Wear the Rose.