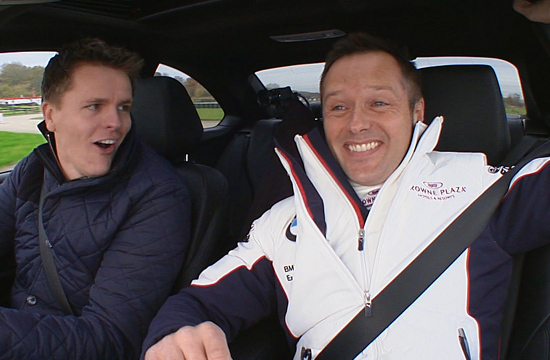 EngineDare has created a unique interactive driving experience which allows participation via Facebook, cinema or mobile. Participants complete a virtual lap to test their driving skills and racing instincts, the top 40 competitors are then invited to compete in a live track day experience that gets them behind the wheel of the new BMW 2 Series Coupe, for real.

To launch the campaign EngineDare filmed BMW ambassador Jake Humphrey and BMW DTM Racing Driver Andy Priaulx taking the 2 series Coupe for a spin (literally in Jake’s case) around a race track. Participants are invited to log onto BMW’s Facebook page to complete a “virtual” lap of the circuit making driving decisions along the way, such as picking the optimum driving line through corners. At the end they are given a timed score and a chance to enter to be at the track day finale in March where the most talented driver will be crowned BMWs Ultimate Driver and will win the opportunity to drive every new BMW in 2014, starting with an exclusive M-Car experience in Austria.

As part of the entry mechanic to the competition, EngineDare also teamed up with Vizeum and Digital Cinema Media (DCM) to create an industry-first and unique Cinema experience of the game. Using the new cinema companion app, cinime, developed by DCM and Yummi, cinemagoers will be prompted during the ads to use their mobile devices to connect to the big screen and play along before the feature film begins. Entries will then be entered into the prize draw.

The top 40 entrants are then invited to an exclusive BMW 2 Series Coupe track day to compete to become BMW’s Ultimate Driver, completing a variety of precision driving challenges such as timed laps, drifting and sprints. The winner on the day will be crowned BMW’s Ultimate Driver by Jake Humphrey and Andy Priaulx. EngineDare will be present throughout the day filming content which will be distributed through BMW’s earned and owned channels after the winner has been announced.

The campaign aims to showcase the car’s unique driving dynamics by putting audience participation at the core of its content strategy. It will be supported by a national 60s cinema ad which is the first in the UK to use ATMOS sound, out-of-home and online advertising, as well as a CRM nurture program.

Laura Stead, Launch & Brand Manager, Marketing Communications at BMW says: “At BMW we place innovation at the core of our business, so it’s important that we continue to find new and engaging ways to talk to our audience. With this campaign, we are demonstrating several industry-firsts that place audience participation and social media at the heart of the communications. We’re really excited to see how the campaign will unfold over the coming months.”