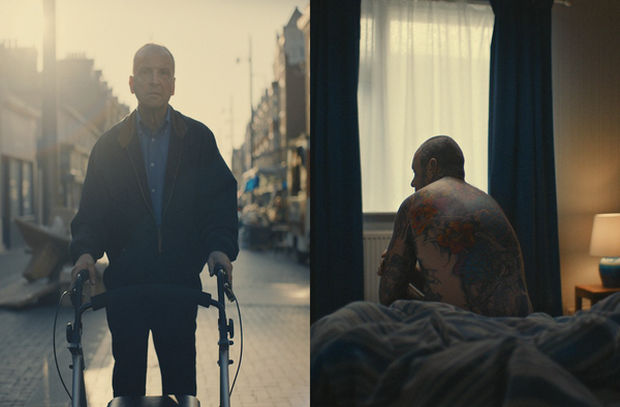 Today, World Parkinson’s Day, sees the launch of a hard-hitting campaign from Parkinson’s UK aimed at raising awareness of the brutality and gravity of the neurological condition. Created by ENGINE, ‘Parkinson’s is’ highlights how Parkinson’s is far more than just the widely perceived “shakes” and is prevalent in a much more diverse group of people than the public might expect – challenging the misconception that it predominantly affects older men.

The film opens with a young tattooed father explaining that “Parkinson’s is my depression”, a lesser known symptom, while a young mother follows with “Parkinson’s is my slowness of movement”, as we see a lipstick simply held next to her lips. Beyond these individual stories the film also explores how the condition affects others, including a woman describing how she worries about her husband’s next fall.

To ensure complete authenticity, ENGINE commissioned the film to feature four people who live with Parkinson’s as opposed to using actors.

The work will run for six weeks on Broadcast VOD and across Facebook and Instagram social channels.

Hannah Dedman, head of brand, marketing and content at Parkinson’s UK said: “For too long Parkinson’s has been misunderstood or put on the list of health conditions that are just an inconvenience. The ‘Parkinson’s Is’ campaign is looking to actively challenge these misconceptions and get Parkinson’s noticed by those who don’t know someone living with it.

“The campaign highlights the reality of life with Parkinson's through the portrayal of relatable and authentic moments, which show the brutality of the condition across a range of unexpected people. We hope it will increase the understanding of Parkinson's as a serious condition and the vital need for a charity like us.”

Simon Hewitt, business director at ENGINE said: “We chose to showcase real diversity in both the people with the condition and the symptoms that most affect them. To do this properly we brought in our director Chris Parton who specialises in telling very raw and personal stories. The 4:3 framing, the pace and the music all fed into making this feel intense and almost claustrophobic, to try and enable our audience to engage and in some way relate to the complexity and brutality of the condition.”

Two people every hour are diagnosed with Parkinson’s, but together we will find a cure. Visit the Parkinson's UK site to find out more.