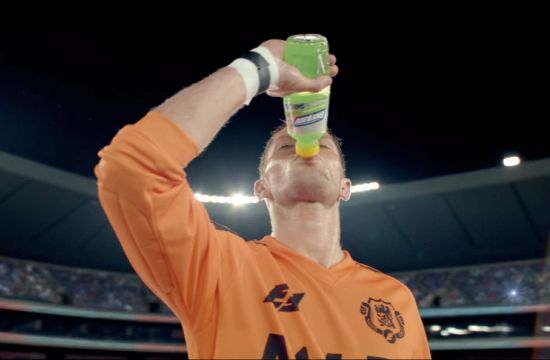 For those moments when you just don’t have enough energy to go on – to save the goal, score the try or win the point – Energade will give you a second-wind version of yourself.

This was the message devised by agency King James – for every moment when you get knocked down; the Energade version of you will get back up. And Sweet Spot Content was tasked with bringing this message to life through the concept of doppelgängers.

To illustrate this concept of doppelgängers as believably as possible, Sweet Spot Content used an incredible amount of detail to replicate real sport. “Sports in commercials often feel like movies. But we wanted to re-create the real thing, in a way that viewers are familiar with – before we suddenly surprise them with the disruption of seeing both the player and the doppelgänger on screen,” says co-director Gareth Paul.

Every small detail was carefully considered in order to accurately and effectively emulate real sport, from studying actual sports footage to get the camera angles right, to designing and making the uniforms.

Sweet Spot Content also wanted to recreate easily understandable plays – a free kick in soccer, a break-away try in rugby and a drop-shot to win the point in tennis – that even a person without much knowledge of sports would understand. They also sourced professional players from local clubs to add that extra level of authenticity.

And putting Energade up there with other leading sports brands, they filmed at FNB Stadium and Ellis Park Stadium to create the scale of high-end sports matches. From there, it was up to Sinister Post Production to bring in the huge crowds that accompany big sports matches. They composited the crowd into shots during post-production – and added Energade branded advertising boards all around the stadium.

But a key element that Sweet Spot Content brought to the commercial was a higher level of interaction for the viewer. They found a way to make the viewer experience the effect of Energade. They captured point-of-view shots, which allowed the viewers who play the game to feel that familiar rush, while the average viewer on the couch gets to live their dream and be part of the action.

They also conceived a drinking shot at the end – a heroic full stop to finish the ad off. Combining all three players in one smooth, choreographed motion, we see one player lift the Energade, the next take a sip and the last slam it down.

But what really made this production a success was the great working partnership between Sweet Spot Content and King James. “We were very excited about working together. Everyone brought all of their expertise to the project, and we worked together every step of the way,” says co-director Miles Goodall.

King James TV producer Kathi Jones says about the experience: “Working with Sweet Spot, I was reminded just how simple things can be – this was due to their ever accommodating nature and meticulous eye for detail. It would be my pleasure to brief them on another job.”

The secret behind Sweet Spot Content’s ability to get every small detail right is their incredibly experienced team and winning formula. Because Miles and Gareth share the directing role, Miles can also focus on cinematography, while Gareth takes care of the production design.

And adding the final touches, bringing this unique team together seamlessly, is Linda Notelovitz. A sophisticated and accomplished producer, she creates an atmosphere of absolute harmony on the shoot, ensuring that everything runs smoothly.

Jones adds: “Miles and Gareth make an excellent team, complimenting each other perfectly, and Linda is such a great support in dealing with details, clients and production issues. They delivered everything they promised – a high impact, sophisticated and energetic commercial for Energade.”