Enel Opens the Door to Drones, Phones and Automobiles in New Spot 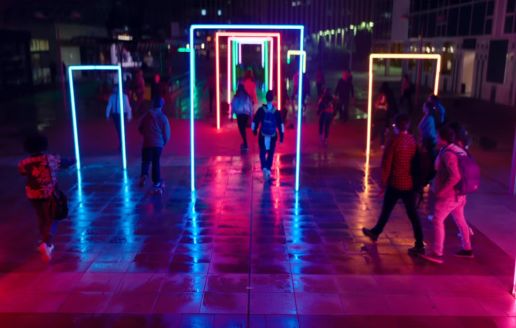 Italian energy giant Enel and Saatchi & Saatchi Italy this week release ‘Door’, Enel's latest TV spot. Following a strategic shift last year to marry both commercial and B2B comms, this new spot continues this approach. Addressing the changing needs of Enel’s consumers, the campaign asks "what does the energy of today look like?" - and showcases its varied and forward-thinking solutions.

The roles and functions of energy continue to rapidly evolve and have progressed from a simple light bulb invented in 1879, to a whole host of innovations which have opened up a plethora of new opportunities. These opportunities have been symbolised in this campaign by a door, "a door that opens up new paths that connects the past with the future and the future with the present. A door that leads us to faster connections to find, discover and share. It allows smart homes to communicate with people and enables electrical motoring to advance further and further.”

The protagonists of the spot include a runner, skater, a group of engineers and a man in an electric car – all of whom pass through neon-coloured doors that lead them into new dimensions: a world where old electrical factories acquire new life and where connections are faster, where smart homes are a reality and where electric cars are the norm. As the voice-over concludes, "Enel energy is a door that opens people up to a world, to new ways of living and a world of possibilities for everyone.”

Created by Saatchi & Saatchi Italy, the advert was directed by ‘We Are From LA’, the French duo recently awarded at the Cannes International Festival of Creativity and creators of the Grammy winning Pharrell Williams 'Happy' video.

The 60 second TVC, and 40 and 30 second cut downs, will air for four weeks from today on TV and run alongside  print and online elements of the campaign. Mindshare was responsible for the media buying.

We Are From LA