Endangered Animals Get it On in Cheeky New WCFF Music Video 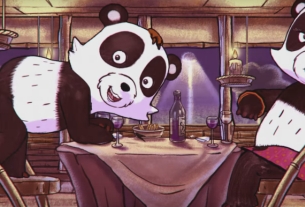 Wildlife Conservation Film Festival (WCFF), an organization that supports the protection of global biodiversity, today announced the launch of a new brand created by DDB New York – ‘Endangered Love’ – that will engage young people on the fight to save endangered species and raise awareness and funds to the cause. This initiative marks the first work for WCFF after appointing DDB New York as its pro bono agency of record in March of this year.

Instead of simply creating a campaign that encourages donations, “Endangered Love” takes a different approach to raising awareness around WCFF’s cause. DDB New York created the brand with the simple thought that the most effective way to avoid extinction is having sex.

Via an e-commerce website, the brand has launched an array of merchandise depicting humorous, slightly risqué illustrations of rhinos, pandas, sloths and gorillas procreating Kama Sutra-style for the continuation of their species. Products range from clothes, accessories, original art work and a series of books called “Panda Sutra,” “Sloth Sutra,” “Rhino Sutra” and “Gorilla Sutra.” All proceeds will be directed to the conversation of pandas, sloths, rhinos and gorillas through WCFF.

In addition, the brand is being launched with an online animated music video that parodies the Lonely Island song, “I Just Had Sex,” in this case sung by pandas. The two minute long music video shows pandas celebrating the act of procreating in a humorous way.

“Surprisingly enough, it’s very difficult to get young people to engage and help out nature conservancy non-profits,” explained Icaro Doria, Chief Creative Officer of DDB New York. “Our goal was to raise awareness for species that are going extinct and encourage people to fund a cause that is essential for the future of the planet. So, what better way to grab attention than to provide humor and joy to a serious global issue?”

A series of print ads are also being launched on Vice Magazine and Metro NYC.

“We are so excited about the launch of the ‘Endangered Love’ brand,” said WCFF Founder and Chief Executive Officer Christopher J. Gervais. “We needed to create something both provocative and fun that would compel young people to engage with WCFF and take action. With this animated film and website, we are confident that ‘Endangered Love’ will have a positive impact on our organization and the cause. Our hope is that by shopping, gifting and sharing, the only thing going extinct will be the missionary position.”

DDB New York launched its partnership with WCFF last month with a rebranding, including a new logo and social presence. In addition to producing creative campaigns for the organization, DDB will work with WCFF to encourage attendance to its flagship event in New York City this October.