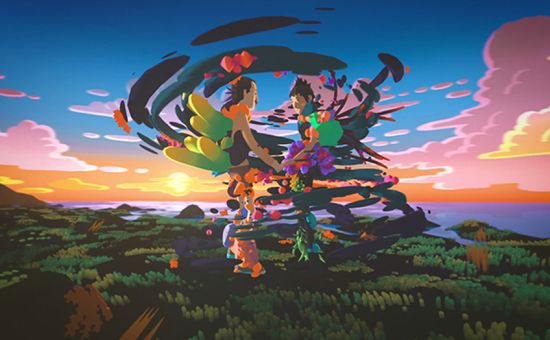 It's the kind of collaboration that is likely to get animation geeks and music video nerds rather excted - Eran Hilleli has teamed up with Encyclopedia Pictura to create Panda Bear’s latest music video “Boys Latin”. The video was written and directed by Encyclopedia Pictura's Isaiah Saxon and Sean Hellfritsch (the visionaries behind Bjork's groundbreaking Wanderlust promo and Grizzly Bear's Knife), with Hilleli working as animation director.

The story, set in a coastal tide pool and filled with saturated hues and atmospheric, inviting animation, follows a young woman as she takes a sunset walk. Happening upon a peculiar sea anemone, she's overcome by a supernatural reaction. Completely enveloped, the swarm propels our hero onward until she crosses paths with a man who seems to be in a similar predicament. Together, they continue on to help others and start a family of sorts.