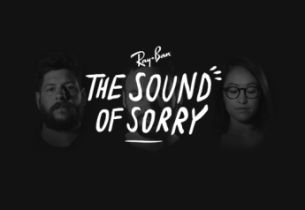 Ray-Ban invited 9 critics and bullies to see things from their victims’ perspective with the hope of achieving reconciliation. To do so, Ray-Ban went looking for real people and stories about regret with the hope of inciting the courage to forgive. Belgium-based interactive boutique agency Gents reunited two brothers, old schoolmates and a former couple and documented the emotional journey in a series of micro-documentaries.

The musical catalyst of the campaign is Elton John’s iconic song “Sorry seems to be the hardest word”. Ray-Ban invited each critic into the recording studio and asked them if they had the courage to face the microphone, using the widely-known lyrics of Elton John’s song for their own redemption.

The result can be experienced online at ray-ban.com, an interactive experience where the sound of sorry comes to life.

The globally-launched digital campaign will go live across social channels and encourage Ray-Ban fans to undertake their own personal acts of courage.

Sorry seems to be the hardest word