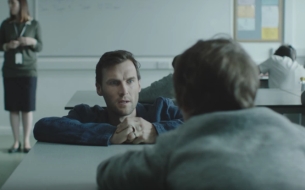 Today, the British Heart Foundation (BHF) announces the launch of its new integrated brand campaign that centres around the sudden and unexpected devastation of heart disease on families: ‘Heart disease is heartless’.

Heart disease can affect anyone at anytime, tearing families apart in an instant. The fact it strikes without warning is what makes it cruel – leaving loved ones with no time to prepare for it, no time to say and do the things they really wish they had. But there’s a way of fighting back. For over 50 years the BHF has pioneered life saving research to fight heart disease, believing that no one should have to suffer this devastation.

The multi channel campaign, created by agency DLKW Lowe, brings together a new film for TV and cinema, ‘Classroom’, on air tonight, together with mobile, digital OOH and online native film content.

Carolan Davidge, Director of Marketing and Engagement said: “This campaign marks the start of a long term strategy for BHF which aims to shift the way people think about heart disease. We want this campaign to give people an emotional punch, showing them that heart disease can rip people away from friends and family without warning.

At the centre of the integrated campaign is the 40 second TVC ‘Classroom’, a poignant, emotional film directed by Tom Tagholm of Park Pictures. The film is supported by a 30 second version. In ‘Classroom’ we see a boy, Ben, sitting at his desk during a routine lesson. His Dad surprises him by being there, standing in front of his desk but the lesson continues and the class don’t notice. Confused by his presence, father and son have an emotional, whispered exchange before the Dad says his final goodbye. The lesson is interrupted as the headmaster knocks and asks for Ben. Through the window we see him in the headmaster’s office being comforted by his Mum as the end line reads, ‘Heart disease is heartless. It strikes without warning.’

In an online film ‘Amazing Dog’, filmed by DLKW Lowe’s in-house production company MAKE, we watch what looks to be a ubiquitous YouTube home movie of an owner and her dog. Frisbee, teddy and ball are no trouble for this amazing catching dog until, out of the blue, our owner suffers a heart attack, dropping the camera, and the home movie becomes a serious reminder of the cruelness of heart disease.

Native film content for the Skype platform follows the same unexpected twist. As a couple celebrate their anniversary online, filmed for real via Skype, the woman suffers a heart attack dropping to the floor leaving her partner alone and concerned on the screen.

A piece of mobile activation also brings the reality of a heart attacks’ impact down to a personal level with the ‘Heart Attack Simulator’. Users are asked to hold their mobile phone against their heart to understand what a heart attack feels like. But it’s not as it seems, as users brace themselves for a simulation of an actual heart attack, instead their phone rings and an audio message describes the real pain of a heart attack is getting a call like this to say a loved one is dead.

Finally, two films ‘Alive’ and ‘Last Words’ will be promoted on BHF’s owned channels, and both feature real people with real stories.  ‘Last Words’ (directed by Park Pictures director Camille Herren) captures with aching poignancy the final phrases that people have said to the friend, family or loved one they lost. In online film ‘Alive’, filmed at the Royal College of Music, we meet real people who have overcome their heart conditions and offers hope thanks to BHF’s life saving research to fight heart disease.