{embrace} Worldwide Hits Out of Bounds with Women's ICL Partnership 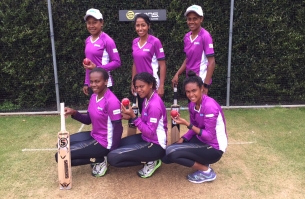 {embrace} worldwide is proud to announce its association with the Women’s ICL Pty Ltd (WICL). Striving to create opportunities and further the commercial development of Women’s cricket in response to market opportunities and player needs, the WICL’s mission and values complement {embrace}’s goals in building a community to help women to succeed.

The WICL is building towards a privately funded, professional Women’s T20 Cricket League. It will feature many of the world’s elite players and also a contingent of the top up and coming cricketers from traditional and non-traditional cricket playing nations.

Shaun Martyn, CEO of WICL, said: "Our key pillars are opportunity, education and performance for women both on and off the sporting field. I am very happy to be associated with {embrace} worldwide because Sharn and Karen are also striving to build a community to support women to be confident and successful.”

Sharn Bedi, co-founder {embrace} worldwide said, "It’s about changing mindsets, for men and women. Supporting women’s cricket is an extension of this philosophy, not only providing opportunities and empowerment for women in sport but also encouraging corporates to get involved by sponsoring and acquiring an asset — being women ambassadors. Diversity makes business sense.”

“Shaun, along with co-founder Lisa Sthalekar, has been doing amazing work for women in cricket and for sport. We were surprised to know that women introduced over arm bowling and are actually the ones constantly innovating and enhancing the sport. We hope our association will help raise awareness for women in cricket and support WICL in taking it to the masses,” added Karen See, co-founder, {embrace} worldwide.