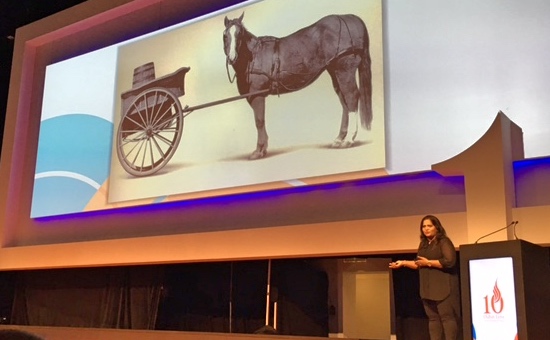 "He created a kaleidoscope of meaning that was a springboard for ideas.” Hephzibah Pathak,Global Brand Director at Ogilvy & Mather India opened her keynote speech atDubai Lynx with a tribute to David Bowie.

The Thin White Duke was perfectly encapsulated the message of her talk ‘CreativityThrough Chaos’; his technique of haphazardly putting together potential lyrics –first on slips of paper and later via computer randomisation – showed, she argued, a flexible approach to creativity that she believes the ad industry can learn from.

As the president of this year’s Dubai Lynx Creative Effectiveness jury, she was on stage to urge the advertising community to remember that effective strategy doesn’t have to mean a rigid approach to creativity.

“I don’t think there’s any conflict between creativity and effectiveness,” she said,using both Bowie and anecdotes of prior projects to illustrate the point that a strategic mind set and acceptance of the ‘chaos’ of creativity can prove a knock out combination.

Of the Ogilvy & Mather India projects that she shared, the wildly popular ZooZoo mascots created for Vodafone’s sponsorship of the Indian Premier League in 2009,were, she argued, a campaign that could have easily ‘overwhelmed and terrified’.The mascots were created to fill 30 one-day ads for each day of the massive national cricket event – a mammoth task and a mammoth risk. But one that paid off; the ZooZoos are now in their sixth season. “I look back and I don’t think we would have reached this place if we hadn’t mixed it up.”

The psychology of the creative process means that ideas often evolve over time, that solutions can pop up at any time and that the journey from initial brainstorm to finished product can take a team in surprising directions. Managing this and being open to the new ideas that emerge and evolve along the way, however, can be challenging to accept.

“The brain is a pattern recognition machine, we don’t like chaos,” she told the audience of creatives, strategists, producers and marketers from across the MENA region and beyond.

But Hephzibah had some pieces of advice for both creative and marketers. She urged the audience to be open to their own emotional response to creative and not to be afraid of developing and trusting in their own gut instinct – after all humans as a species tend to respond emotionally and apply analysis post-hoc. She also noted that ‘half-finished’ ideas were not to be automatically discarded, and that with a little nurturing and coaxing they could reveal their own golden nugget.

As Hephzibah prepares to guide her jury through the rigours of the Creative Effectiveness category,her talk was a welcome reminder that real impact comes not only from cold reason but also hot-blooded creativity.