Email & Mail Can Work Together for Businesses According to Royal Mail 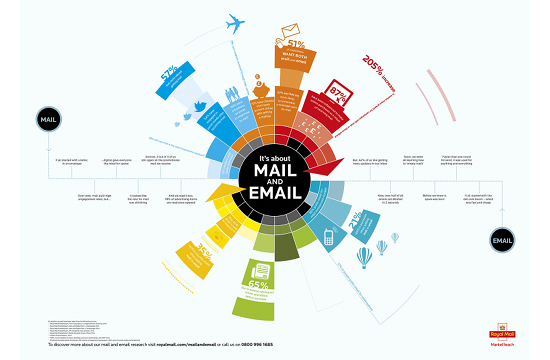 Direct and digital agency, Publicis Chemistry, has produced a new campaign for Royal Mail MarketReach, supported by the brand’s new research which highlights the value of mail working in conjunction with digital.

The campaign, which represents the first in a series of communications, presents a strong case for businesses to use both mail and email when communicating with customers. The colourful, eye-catching infographic hopes to reappraise the medium of mail for businesses and the Royal Mail brand.

The campaign aims to target new, lapsed and existing Royal Mail customers, who spend a minimum of £200k/year on media and will also reach influencers such as creative and media agencies, print, production and mailing houses and the marketing press.

The findings show that mail creates stronger emotional engagement between sender and recipient with the majority of people surveyed saying that mail grabs their attention, gives a better impression of the company and makes them feel more valued. Meanwhile emails are considered good for follow-up and easy to file.

The study revealed that consumers are very clear that mail and email have different qualities which make them suited to different things. 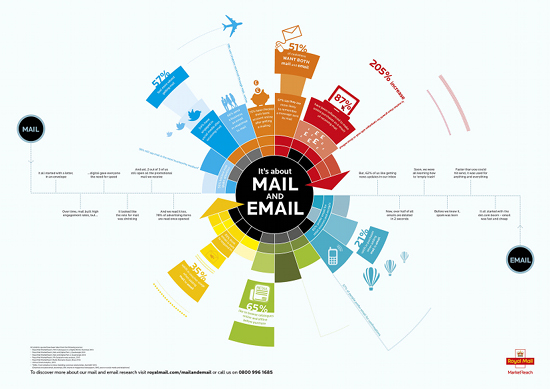 - More than three times as many people (57 per cent) said receiving information from businesses in the mail made them feel valued, compared with email (17 per cent). This is an increase of 31% since 2007

- 56 per cent of people surveyed said they spend time reading mail, an increase of 22 per cent since 2007. Just under half as many people surveyed (27 per cent) said that was the case with email

- Almost twice as many people (56 per cent) said mail grabs attention, compared with email (31 per cent)

- 55 per cent of people surveyed believe communications through the post delivers a brand impression. Only 25 per cent said the same was true of email

- Almost six in ten (57 per cent) said email was good for follow up, compared to 21 per cent for mail

Mike Welsh, CEO at Publicis Chemistry added: “Mail is changing and we’ve got plenty of news to tell people. If we want people to listen and believe us, we have to behave differently. This piece is just the first step on that journey, and represents our statement of intent, if you like”.

Jonathan Harman, Managing Director Royal Mail MarketReach, said: “Our research shows that mail has a vital role to play in the today's digital world and it continues to be a powerful weapon in the marketer’s armoury.

“Email has advantages, not least its speed but consumers are clear that mail and email have different qualities which make each suited to different types of communication.

Consumers say that mail's core strengths have not only endured the digital revolution but many are actually stronger today than they were before the iPhone."

In further analysis of the Institute of Practitioners in Advertising (IPA) databank commissioned by Royal Mail, independent marketing consultant Peter Field revealed that complementing marketing campaigns with mail pays. His study found that 27 per cent more campaigns that delivered high sales performance included mail than those that did not include mail in the mix. In addition, 40 per cent more campaigns that drove high acquisition levels contained mail than those without mail. Campaigns with mail achieved over twice (205%) the market share growth than campaigns without mail in the mix.