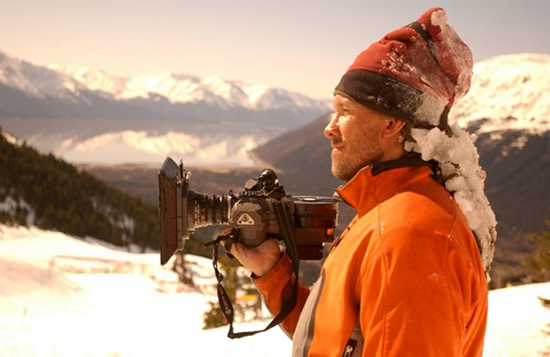 “Scott and I worked together on an intense Range Rover job,” explains Halpern. “It was there that I got to see his keen eye and command of an extremely complex shoot. Because of his elegant ability to extract the essence of a concept through compelling visual storytelling, I am very pleased to have him with us at EMA and delighted to be able to show his work to all who are interested in seeing the best of automotive, fashion, sports, extreme situations; and a truly authentic American voice.”

“We are absolutely thrilled to add Scott Duncan to our Commercial Division’s directorial roster,” adds Lee Nelson, President & CEO of EMA. “Scott is exactly the kind of world-class filmmaker that we want to be part of our company. He is someone who has dedicated his career to high production values and authentic storytelling.”

Scott Duncan is a dynamic and highly sought-after Director/Cinematographer. Duncan has earned nine Emmy Awards for “Individual Achievement in Cinematography” and “Best Documentary,” and has received a total of 26 Emmy nominations throughout his career. Duncan approaches filmmaking with style, sophistication, and a clear point of view. He is a filmmaker whose precision and expertise have earned him the respect and admiration of clients and colleagues around the world. His network client roster is as diverse as it is impressive from NBC Sports, CBS Sports, ESPN, Red Bull Media, TNT, to Hallmark Channel. Advertising agencies such as Y&R, Grey Worldwide, Draft FCB, McCann Worldwide, Averett Free Ginsberg, have brought Duncan onboard to lead high-profile ad campaigns. Duncan’s commercial work includes directing and shooting for high-profile national and international clients such as Ford Motor Company, Land Rover, BMW, Terlato Wines International, Archer Daniels Midland, Purina, Miller Genuine Draft, Emerson Corp, General Motors, IZOD, among others. For over a decade, Duncan’s imagery has visually represented the Summer and Winter Olympic Games’ broadcasts within the powerful Opening Films since the 2000 Summer Games. With a global audience reach, billions of viewers have been captivated by his work that has earned Duncan and NBC Sports multiple Emmy Awards.

“I’ve known Andrew for many years, and truly believe that he and Lee have a new vision for where the commercial and advertising industry is going,” comments Director/DP Scott Duncan. “Neither of them is afraid to break with old constructs, and embrace new models, both in terms of filmmaking and the business of advertising. I have shot all over the world, and enjoy whatever the next challenge brings. I am really looking forward to the opportunities ahead with EMA; and being part of a true collaborative partnership with Andrew and Lee.”

Just this past year, Duncan was nominated for a Sport's Emmy for “Outstanding Achievement in an Open/Teaser.” He wrote, directed and shot The Red Bull Signature Series Show Open on location in Breckenridge, CO and the California Desert. He directed the Purina "We Believe" Campaign, shot on location in New Zealand. There, he directed, shot, and did print photography for four spots. He also directed and shot a spot for DCU Bank. Shooting on location in South Africa, Duncan shot and did the print campaign for the Purina African Wildcat campaign in South Africa. Shot on Safari in-land from Durban, this project celebrated the African Wildcat. Duncan also directed and shot a 47 brand commercial campaign, featuring co-eds having fun wearing their favorite NFL team vintage style apparel. He also directed and shot a campaign for the Drive-Time company. A six-spot campaign featuring a docu-perspective, the campaign was shot in black-and-white, then transitions to color. So impressed with the African Wildcat campaign, Purina invited Duncan back to direct, shoot, and do print for a series of Purina cat spots for the European market. Also during this past year, Duncan worked via a Canadian production company directing/shooting a BC Tourism Campaign. From Vancouver he headed up to Alaska and shot the Open for a Nat Geo series “Ultimate Survivor Alaska.” In the opposite climate of The Dominican Republic, Duncan directed and shot the IZOD “Living the Dream” golf and lifestyle spots for PVH/Izod. Recently, Duncan has directed and shot the “We Got That Power” promotional campaign for the NBA Finals on ESPN featuring will.i.am. Duncan is in the midst of gathering imagery throughout Brazil to create the open short film tease for the FIFA 2014 World Cup spot on ESPN.

“With fourteen years of working together on challenging and dynamic projects around the globe, Scott is an innovator and visionary,” concludes Katherine Kennedy, Scott’s long-time Producer. “He embarks on each project from his unique perspective, revealing a story, approach, or technique, that had not yet be considered. The results are an elevated creative for our clients and a heightened experience overall. Scott is one of the most fearless people I know. He was raised as an endurance athlete and adventurer. He maps out a creative plan, moves fast, and demands a team that can keep up with his pace and make things happen. As his Producer, I have enjoyed fine-tuning the skills needed to do just that with him. It is tremendously rewarding working along side Scott. Entering into the relationship with EMA stems from our faith in Lee and Andrew on their industry experience and innovative approach to the new work model necessary to succeed in the production arena. We are very excited for what we can make happen together.”