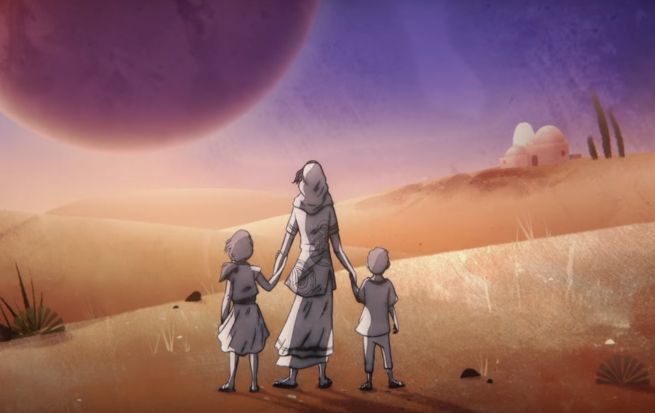 The search for the first ever official music videos for three of Elton John and Bernie Taupin’s most iconic songs reached its conclusion today with the winning works premiering during the Cannes Film Festival and on YouTube.

Videos for Tiny Dancer, Rocket Man, and Bennie and the Jets – released in 1971, 1972 and 1973 respectively, before the emergence of music videos – were revealed at a star-studded screening in Cannes following a global competition to create official videos for the tracks by the best in undiscovered creative talent.

Adhering to three specific visual mediums, the winners are Majid Adin for Rocket Man, which had an animation brief; Jack Whiteley and Laura Brownhill for Bennie and the Jets, which features choreography; and Max Weiland for Tiny Dancer, which has a live-action creative concept.

Majid Adin’s winning video for Rocket Man is a poignant animated work which draws on his personal experiences as an Iranian refugee making his way to England – giving a new perspective to the lyrics and themes of travel and loneliness. A fine art university graduate working in animation production, Adin travelled across Europe during the 2015 refugee crisis, spending time in the infamous Calais Jungle camp before being granted asylum in the UK and now rebuilding his life as an artist in Britain. Majid partnered with animation director Stephen McNally to realise his vision for this achingly powerful and human story.

The Bennie and the Jets video has been interpreted by directors Jack Whiteley and Laura Brownhill as a futuristic talent show. The set and central structure takes its inspiration from Fritz Lang’s 1927 science-fiction film, Metropolis, while the synchronised choreography is inspired by Busby Berkeley films, and the black and white aesthetic is a nod to the classic Hollywood era.

Max Weiland’s winning video for Tiny Dancer is a tribute to Los Angeles, with the iconic track as the link between the city’s inhabitants. The video shows people experiencing the breadth of life, from Quinceanera to scattering a loved ones ashes, joined in their joy for the song as it plays through their radios.

The Cannes premiere included on-stage discussions with songwriters Elton John and Bernie Taupin, moderated by Spike Lee, with all the winners in attendance. The contest was launched with the aim to give aspiring creatives a unique platform to showcase their work for these much-loved hits, as well as giving the songs new meanings in 2017 – the 50th anniversary year of Elton John and Bernie Taupin’s writing partnership.

Elton John says: “I’ve been moved and amazed by these re-imaginings of our songs and pretty humbled by the process overall. The future of creativity is clearly collaborative, fusing art and technology and it’s been fantastic to open up our work to the next generation of creative talent and to share that process with the world on YouTube.”

YouTube’s Vivien Lewit says: “The Cut shares so many hallmarks of YouTube’s ethos - it’s about openly inspiring ideas, providing a platform for emerging talent and people sharing their creativity with the world. But the heart and soul of this project are Elton John and Bernie Taupin - who brought their vision to life and are encouraging a new generation to express their versions of the legendary songs they wrote and recorded. And these videos are truly wonderful."

The search for the video creators was launched in December 2016 with entries received from over 50 countries worldwide. Shortlists of potential winners were then whittled down by YouTube mentors that were assigned to each video category: Kurt Hugo Schneider for Live action – Tiny Dancer, Parris Goebel for Choreography - Bennie and the Jets and PES  for Animation – Rocket Man. The mentors joined an all-star judging panel: Barry Jenkins, Jeffrey Katzenberg and Melina Matsoukas, as well as Bernie and Elton themselves to select the three final winners in February 2017. Once chosen, the winners were given the opportunity to realise their music videos and granted $10,000 for future creative endeavours.

Elton John: The Cut is produced with the help of brand experience agency AKQA, and production studio Pulse Films.