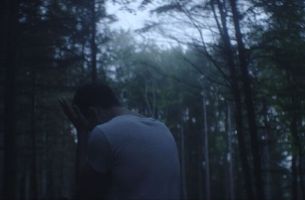 Directed by Elle Ginter, with cinematographer Daniel Stewart, 'Why We Wake' is a 5-minute film that, through stunning visuals, intimately delves in to a man's depression as he wakes up each morning searching for purpose. The film was written as Elle witnessed family and friends, specifically within the commercial film industry and the military, struggle through various levels of depression, PTSD and chronic anxiety while maintaining successful careers. What truly stands out about this project, however, is the story behind the film.

Depression: we don't see it on social media, Twitter, or Facebook often because it's not happy - it’s not lighthearted. But the fact is this:  every forty seconds, somewhere in the world, someone takes his or her own life. It is particularly and secretly rampant within the film industry and military, fields that push its participants to their mental and emotional limits.

Ginter explains, “I knew I wanted to write and direct a project on depression and PTSD. For me, the two are closely related and highly under-discussed, especially within the two groups that hold the highest rate of suicide: artists and military. My husband is an exceptional executive producer in the film industry. He is also an army veteran who deployed to Iraq in 2008. While attempting to understand his experiences better, I assembled my crew. The first question I asked each person was, “Do you know anyone that has struggled with any level of depression or anxiety and/or have you ever gone through any level of it yourself?” I didn't want this to be a surface level project; I wanted every person to be personally invested. The reality that struck me the hardest was that everyone said, ‘Yes,’ to one of the two.”

That answer opened a larger conversation between family, friends, co-workers and strangers about their personal experiences with different levels of depression and PTSD. Over time, it became an open subject - one where the crew not only learned deeply about each other, but poured into the film from their own personal places.