Eliot Rausch Directs 'Get Back' for Lincoln 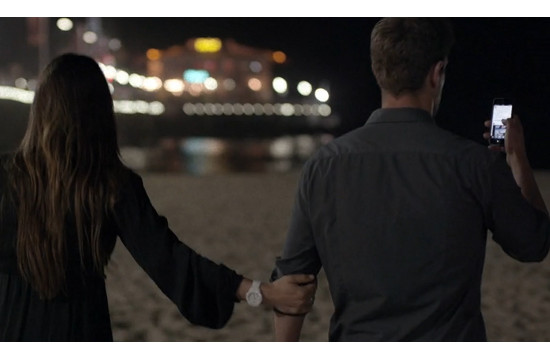 The Lincoln Motor Company has partnered with global video community Vimeo for the “Hello, Again” series, a project that commissions filmmakers to re-imagine familiar ideas into something fresh and new.  The collaboration comes from Vimeo's just-launched Brand Creative Fund, which positions Vimeo in an agency-style role, working with brands to vet community filmmakers for special projects; in this case – to interpret Lincoln’s theme with significant creative freedom.  The partnership forges a symbiotic relationship between filmmaking and commerce, with Lincoln repositioning their vision on conventional advertising by encouraging artists to create something meaningful.

When Lincoln approached Director Eliot Rausch to create a short film interpreting the theme of “Hello, Again”, he found himself increasingly distracted by his phone, his email, and his constant need to be in touch.  It was then, Rausch says, that he thought: “‘This is the idea.’  It's about digital distraction and how interfacing with technology is affecting our relationships."

In “Get Back,” Eliot explores the impact of so much accessible technology on our personal relationships.  The elegiac short showcases a young couple trying to work out life and love in a digital world shaped by the devices that connect us – and keep us from connecting with one another.  Although the themes in the film feel familiar, the story unfolds with the nuance and poetry unique to Eliot's work.  Precious moments are ignored from the glare of a smartphone, unheard questions and neglected answers, and glimpses of memories documented through a phone screen but not lived.  The study of the couple unfolds without the traditional use of a script or dialogue, leaving the viewer with a decentralized, familiar sense of isolation and dread.

“Get Back” was released with a behind-the-scenes video, as well as a poignant introduction from the director, who explains that making the film – and re-imagining his own life – was needed to break from the devices that were stealing his attention away from the present.  The short, Rausch says, was made to show “what is happening in our culture, what is happening in my personal life.  It’s so hard for me to be present.  We’re missing something very big, as we’re all sort of buried in our technology and buried in our phones.  We’re missing some really important part of life that we’ll never have again.”

Rausch acknowledges the fine line he must walk with technology as a documentary filmmaker with the innate urge to record everything around him.  As a director, Rausch is very familiar with the upsides of technology and the rewards of connecting to others via digital media, with his rise to prominence beginning on Vimeo after his heartbreaking short Last Minutes with Oden won the first Vimeo Awards in 2010.  He has since moved into the commercial world, directing his emotion-driven documentary-style for brands such as Under Armour and Duracell with Uber Content.  His moving Expedia spot “Find Your Understanding” with 180LA won AdAge Viral Video Awards and was honored by TED as one of “The World’s Most World-Changing Ads.”

Without the commission from the new Vimeo Brand Fund, Rausch says, he might not have ever made the film.  Vimeo’s involvement assured Rausch that the project would protect the filmmaker’s creative integrity in the context of digital advertising, encouraging Rausch "to freely open my heart and explore something meaningful."  Rausch views the partnership between Lincoln and Vimeo’s artistic community a great step forward for branded content, allowing the content to be creatively driven by the artist.  "It gets me excited that there is almost this European sensibility in treating the filmmaker as a storyteller.  The brand is just trying to facilitate their vision.  It's a beautiful thing."