Elias Crafts Music for 'The Power Inside' 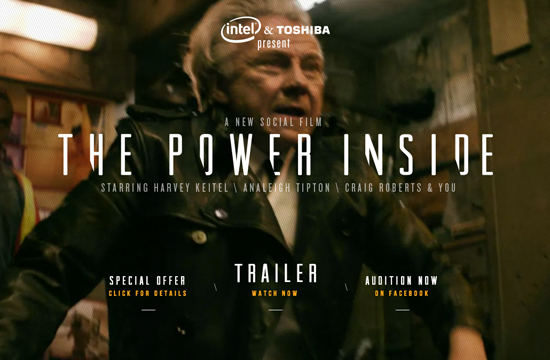 Award-winning audio shop Elias is proud to be part of the immense talent that has contributed to “The Power Inside,” a landmark social film experience from technology leaders Intel and Toshiba.

Conceived by Pereira & O’Dell, “The Power Inside” follows actors Harvey Keitel, Craig Roberts, Analeigh Tipton, Reid Ewing and Zack Pearlman in the tale of an atypical zombie alien invasion. The main character Neil (Roberts), together with his friends and the help of technology, must discover his “power inside” to defeat a race of extraterrestrials that invade in the unlikely form of moustaches and unibrows on innocent earthlings.

Elias composed all of the music for the blockbuster-class film, shot by Furlined directing duo Will Speck and Josh Gordon of Blades of Glory fame. Having worked together in the past, Speck and Gordon trusted Elias to flex their creative expertise. ECD Brent Nichols led the talents of the entire Elias team, from Jonathan Elias to the newest composers, who all deftly set the tone for the film that range from suspenseful to wildly campy.

The Elias collective created a refreshingly original score that showcases a diverse range of genres, from epic string-driven dramatic cues to programming-heavy distortion. The trailer itself starts in with a cinematic orchestral arrangement; then builds into a squall of distorted electronic beats before kicking into a full rock arrangement and back again, seamlessly woven together.

This is the third year that Intel and Toshiba have partnered with Hollywood’s top talents to create an immersive film that engages the viewer to participate; with last year’s saga “The Beauty Inside” winning a 2013 Daytime Emmy award for Outstanding New Approach to Daytime Programming. “The Power Inside” called for viewer participation well before the full debut episode premiered online August 15th, launching with a first look and trailer that invited fans to audition for a chance to be cast in the film. The remaining episodes of the film will be released online each week over a six-week period.

Elias injects “The Power Inside” with a bold, relevant sound, playing an integral part in a groundbreaking moment for the alignment of entertainment, technology and advertising, as well as the future of branded content.