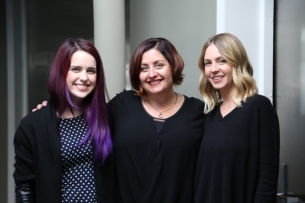 With a diverse background spanning advertising, promotions and production, Netter has worked with such notable clients as Sprint, Taco Bell, Verizon Wireless, GMC and Johnson & Johnson, to name a few. She comes to Elias with extensive insight into commercial music production, having spent a number of years supervising music production on the agency side, including working on the music production on songs for the Got Milk? Mother’s Day campaign with Ray Charles, Aretha Franklin and Leann Rimes.

Ordeshook brings over 15 years of experience producing every aspect of the audio production process, having lent her talents to a number of top shops including Machine Head, Comma Music, Superfad, and The Lodge Music. She joined Elias Music Library in 2013 and will now oversee all of Elias Arts’ operations, spanning original composition, to music licensing, to sound design, to its extensive music library.

Prior to Elias, Overcash spent three years at Deutsch LA, initially working on the PlayStation account team before becoming a Post Producer. She spearheaded the build-out of their in-house post facility and successfully curated a roster of seasoned editors and animators. Having always had a passion for all things music, she joined Elias as a Producer in 2013, rising to Senior Producer and now Head of Production while working with brands such as Audi, Google, Nike, Taco Bell, Target and Starbucks.

Notes Elias Arts Executive Creative Director Vincenzo LoRusso, “I’m excited to have this amazing new production team in place. They are the ‘front line’ of Elias and you couldn’t ask for a better group to represent who we are today. Collectively, they bring a wealth of experience, excitement, and innovative perspective to get the job done.”