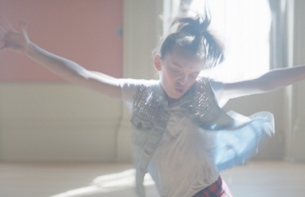 Best known for her YouTube video choreographed to Nicki Minaj "Anaconda," Taylor Hatala has caught the eyes of ten of millions and has even appeared on The Ellen DeGeneres Show. She is also Canadian. So when Toronto-based OPC director Max Sherman was looking to create a piece of branded content for Bose, he reached out to her management to collaborate with her on the project.

"I wanted to do something different, and I wanted to push Taylor out of her musical comfort zone to see what she would come up with,” says Sherman. “Taylor and her choreographer, Alexander Chung, choreographed and rehearsed a routine, and I couldn’t be happier with the way it turned out. She's tantalizing to watch.”

The video was created for Bose via MOFILM, a content sourcing company which allows filmmakers to produce video and photographic content for various brands and social causes.