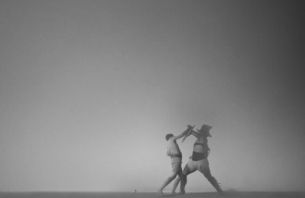 Exploring themes of battle, discovery and love both won and lost in sweeping, epic fashion, production company World Famous and director Dan Brown take us on a black & white journey through time in a music video for electronic duo Odesza’s wistful yet warming song, 'It’s Only.'

To capture and amplify the alluring tone of the track while forging a path from ancient times to present day, Brown and his team drew up a variety of eclectic characters and themes including cave-dwellers, conquistadors, elephants, modern-day protesters engaging riot cops and even Cleopatra amidst dusty, foggy and stark landscapes. According to the director, corralling the cast for a pivotal moment in the video was one of the highlights of the month-long shoot for 'It’s Only.' “We enlisted Odesza to help us do a local casting call for our riot scene and just got a huge response,” he says. “Quickly, hundreds of people asked to be involved.”

Despite budget constraints, World Famous and Brown’s passion drove the resulting video for “It’s Only,” which matches the mystery of the song while adding the cinematic majesty that ultimately resonates in the end. Regarding the video’s epic scope and themes, Brown adds, “‘It’s Only’ speaks to something elemental, fire, water, love, but from a viewpoint that seems removed. Things happen, good or bad. So it goes. This inspired a story about mankind, all of mankind, from the stone age through our bloody past and into the present using that same lens.”