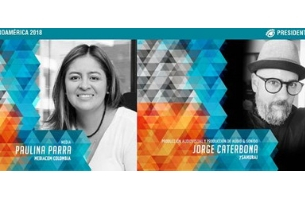 El Ojo celebrates the best creativity in Latin America. To choose the best ideas, cases and works, the festival announces the Presidents of the Jury who complete the list of Presidents.

PAULINA PARRA
Paulina Parra is the CEO of MediaCom Colombia and President of the IAB Colombia Board of Directors. She is a professional with more than 15 years of experience in the advertising industry,  motivated by her passion for innovation, creativity and digital development. This has led her to participate in the leadership and strengthening of the industry, resulting in various awards throughout her career. Paulina leads MediaCom following a philosophy based in results and a team inspired by the vision of change, innovation and client service. Among her achievements, Paulina has been a Jury in Cannes Lions in 2010 and 2016; and Jury in the FOMLA 2015. Nowadays, Paulina leads the second best agency acknowledged by the Scopen ranking as Best Place to Work, she has also been named as one of the eleven women that have taken leadership to a whole new level, by Women to Watch Colombia 2018. After being part of the Jury for El Ojo Innovation on 2011, this year Paulina Parra takes up the responsibility of being President of the Jury for El Ojo Media and acknowledge the best ideas that make the best use of creativity and innovation in media.

JORGE CATERBONA
Jorge Caterbona is Partner and Director of 7Samurai, production company founded in 2002 and that rapidly consolidated as one of the most recognized and awarded advertising film production companies of the country. He graduated from the ENERC (Centro Experimental de Realización Cinematográfica) in Argentina and, parallel to his studies in Buenos Aires, he began working as an assistant director and chief of production for directors such as Luis Puenzo, Martín Lobo and Carlos Sorín. On 2000 he settled on Lima, where he now works as a director for advertising and music videos. Amongst his awards, 7Samurai was the first Peruvian production company to receive a Gold Lion in Cannes for TV, in addition, he ibtained the Ace awards for the music video “Tumbas de la Gloria”, song by Fito Paez, and the Gran APAP in 2005 and 2006 for best director. El Ojo de Iberoamérica recognized him as Best Director in Perú on 2005 and 2009, as well as recognizing 7Samurai as the Best Preuvian Production Company on 2005. This year, Jorge Caterbona will be in charge of leading the Jury that will choose the best ideas for El Ojo Film Craft and El Ojo Audio and Sound Craft.

As always, each time we gather, something interesting comes up

The registration of pieces, campaigns and cases to participate in their 2018 Awards can be made until September 21.