The Influencers 126 Add to collection

INFLUENCER: Southpaw's Nicole Kirkland tells us what she learned at the recent IPA event 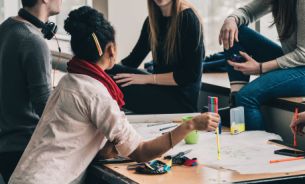 If I can be so bold as to say it, I’m a fountain of information at the moment. Unfortunately for me, my cup ‘overfloweth’ and I’m still wrestling with how best to share and apply what I’ve learnt ‘up the funnel’. You see, I was lucky enough to attend much of the IPA’s EffWeek the week before last, and the irony of a week devoted to ‘Marketing Effectiveness In the Digital Era’ is that I’ve been left with pages of ‘data’ by way of quotations, statistics and notes, and am now navigating how to apply them to best effect. To use an analogy, I’m a little bit like a kid bursting out of the school gates, overly keen to share her latest piece of art work and stories from the day.

That being said, I still think we’ve got a long way to go to solving the issues surrounding marketing effectiveness in the digital era. And at the risk of applying lowest common denominator thinking and oversimplifying issues and topics that at their most severe, could be career and industry terminating, I’ve decided to take a step back.

I’ve decided to try and think more upstream, and I’d like to challenge others to do the same, because I fear that as a collective we’re getting a bit too caught up in the weeds, when what we need to be doing is a bit of ‘course correction’. And what is it that I think we’ve lost sight of? Simply put, the business that we’re in.

Go ahead, stop what you’re doing and ask the person on either side of you what that is. Creative comms? Advertising? Content marketing? Selling? People? A business sector like Retail/Finance/FMCG/Service?

None of them are wrong.

That’s why Neil Henderson’s and Kenyatte Nelson’s point about not letting technology override our need to deliver culturally relevant stories couldn’t have been more apt, or why hearing about the latest software developed by Diageo to help them optimise their budgets left me equal parts excited and fearful. But I worry that somewhere between the bottles of the first AI brewed beer (yes really), VR experiential campaigns and machine learning, we’ve overlooked what is at the very heart of what we do, our own ‘brand essence’ if you like.

I can’t take credit for this idea. It was Marsha Lindsay who pointed out the obvious, but overlooked fact that “it’s not content, but conversations, that people are after. And that [as people] we are hardwired to seek them out."

In an era where velocity is the new metric against which business success is being measured, and planners are furiously defending the need to manage short-term vs. long-term growth, the point that ‘nothing moves faster than a conversation,’ is so simple and obvious that one would be forgiven for dismissing it without much thought. Until EffWeek, I had.

But I think Lindsay’s onto something. And I think it’s time we gave it some proper thought. If we think about ourselves as being in the conversation business, then the type of content, the mix we use to promote it, and the way we measure it will all be different. I’d like to think that even those hard-to-have conversations with shareholders and the C-Suite might evolve if the focus of what we’re doing shifts from ‘outputs’ to ‘outcomes’ in the way that Lindsay suggested.

So what three things am I going to start doing differently from now on?

I’m going to ladder up the ‘objectives’ on any brief to include ‘outcomes’.

I’m going to insist that alongside every brand idea is a signature brand conversation for us to rally around.

And finally, I’m going to talk to my clients about the immediate and ongoing conversations that they want to have with their audience in order to shift media mix conversations away from perceptions and over to reality.

I’m under no illusions. The above isn’t going to set the Planning world alight, nor is it going solve all of our industry’s problems overnight. But the long and short of it is that I think it’s a step in the right direction. And surely that in itself, is worth having a conversation about.

Nicole Kirkland is advertising account planner and strategist at Southpaw